Ravenna was our sixth port of call for our cruise. Throughout our cruise we had visited many popular cities that everyone talks about, but we have never heard anyone talk about Ravenna before, which is such a shame. Ravenna is a beautiful city known for their history, culture and early Christian and Byzantine mosaics. Our day in Ravenna was spent wandering throughout the city in search for the mosaics in five different locations – Mausoleum of Galla Placidia, Basilica of San Vitale, Basilica of Sant’Apollinare Nuovo, Neonian Baptistery and Archiepiscopal Museum and the Chapel of St. Andrew.

First thing first, food and drinks! We walked to Ravenna’s Piazza del Popolo and shared some refreshing frozen sorbet in the summer heat – coffee and lemon. The coffee one was Shelby’s and ended up being ten times better than my lemon. Italians sure know how to make their coffee, it was delicious! Since I am the big sister, I definitely one upped my little sister and almost finished her coffee sorbet. When it comes to dessert I do not play nice. During the entire cruise, my cousins, Angela and Maria, kept raving about piadinas, a known Italian thin flatbread sandwich. For our first piadina we chose wisely, a nutella piadina and it was tasty! Not a bad way to start our day in Ravenna. 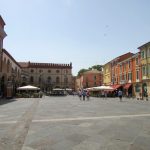 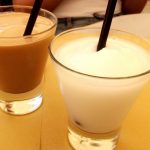 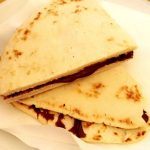 After we finished our snacks we went to Opera di Religione della Diocesi di Ravenna, where we purchased a self walking tour to discover five UNESCO World Heritage Sites for €8.50 per person. In addition to receiving our tickets we were also provided a map listing the sites along a paved trail to follow – no GPS needed as the map was very helpful. The Mausoleum of Galla Placidia is a Christian funerary monument that has mosaic art embracing faith and the transition of passage from life in time to life eternal. It is known for the cupola which has mosaics that symbolizes the sky. The cupola is covered in blue with 570 golden stars with a glorious cross, the Christian symbol of the resurrection. 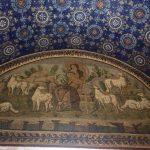 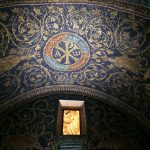 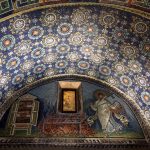 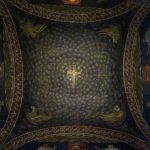 The Basilica of San Vitale is a place of contemplation and a symbol of Archiepiscopal Chancellery of Ravenna. It is famous for its mosaics commissioned by Archbishop Maximian (546/556 AD), and has the most colorful apse of mosaics. There is a mosaic at the focal point of the apse that exhibits Christ in the center with archangels, Michael and Gabriel by his side. The basilica and the mosaics inside are truly glorious. 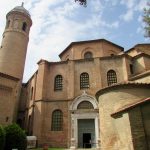 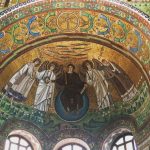 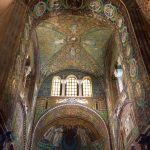 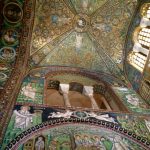 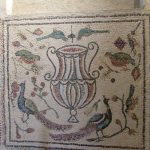 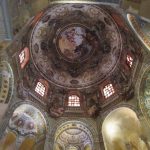 The Basilica of Sant’Apollinare Nuovo is an Arian church that was originally dedicated in 504 AD to “Christ the Redeemer”. The basilica has a walkway in the center with archways on both sides. On both sides are three sections of mosaics: the upper brand, middle brand and lower brand. The mosaics on the left of the upper brand depicts Jesus’ miracles and parables, while the mosaics on the right depict the Passion and Resurrection. The middle brand contains sixteen prophets on both sides in celebration of the Book to confirm the importance of Prophets. The lower brand on the left has a procession of twenty-two Virgins of the Byzantine period, led by the Three Magi, while the right has a procession of twenty-six Martyrs, led by Saint Martin. 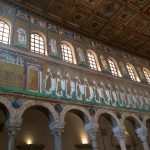 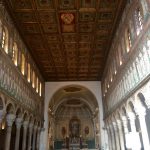 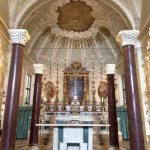 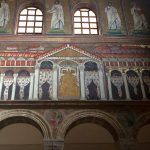 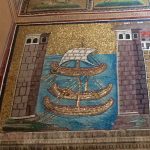 The Leonian Baptistery is famous for its three banded mosaic in the cupola, which was commissioned by Bishop Neonius. The first band (center), showcases the baptism of Christ. The second band (and largest), represents the twelve apostles led by their respective leaders, Peter and Paul. The third band represents the heavenly garden, the Kingdom of god and destiny for the neophytes baptised in the Neonian Baptistery. 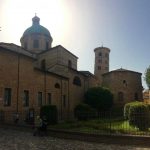 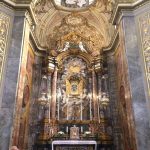 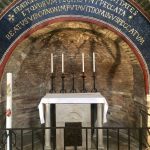 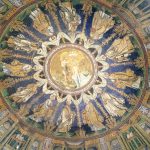 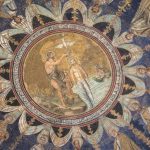 Archiepiscopal Museum and the Chapel of St. Andrew

The Archiepiscopal Museum contains relics and fragments of mosaics that were preserved from the first cathedral church and the Chapel of St. Andrew. The relics and fragments of mosaics were unlike the colorful and vibrant mosaics we had seen in Ravenna all day long. They were more ancient looking, which should come to no surprise since they were constructed around AD 500. The Archbishop’s Chapel inside the museum is the oldest surviving private Christian oratory, thus making it a UNESCO World Cultural Heritage site. Unfortunately, the museum does not allow pictures inside to preserve the relics. Besides the mosaics, Ravenna has one more remarkable site, Dante’s Tomb. The famous Italian poet lived his last years in Ravenna since he was exiled from his hometown in Florence, therefore he was buried in Ravenna. It was also near the Archiepiscopal Museum and the Chapel of St. Andrew, so we took the opportunity to see the well known tomb. 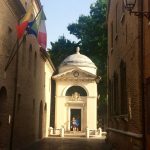 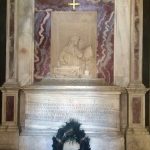 Overall, we enjoyed our day walking through Ravenna, learning the city’s culture and history through their marvelous mosaics. 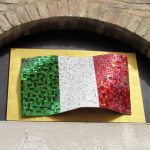 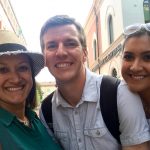 […] in the middle of a summer day. One of my favorite memories was enjoying a cup of hot chocolate in Ravenna at this beautiful patisserie. Then we went to a local grocery store and my cousin purchased a half […]

[…] should not be missed because of its wonderful mosaics throughout the city. One of the best ways to see the mosaics in Ravenna is by taking a self-guided walking tour of Opera di Religione della Diocesi di Ravenna. This tour […]

Gatteo a Mare – A Weekend With Italian Relatives | Our Sweet Adventures

[…] moment we fell in love with piadinas – Italian thin flatbread sandwich. We had them before in Ravenna, but never as good as the ones we had in Gatteo a Mare! We went to a nearby piadina restaurant […]

I love mosaics and these ones are really stunning! Excellent post!

Sounds like a great place. I have never heard of it before. The pictures are beautiful as well. I love visiting ancient building and churches.

Ravenna is definitely a beautiful hidden gem in Italy. It sounds like you would enjoy it here.