We visited Kansas City for one of Adam’s best friends, Kyle and his now wife, Melissa. Adam was a handsome groomsman and therefore we only had a few hours to explore in our three days in Kansas City. So, how did we spend those luxurious hours? With barbecue and beer of course!

Kansas City is known across the United States for their barbecue, but as a Texan I cannot believe to even fathom the idea that Kansas City has the best barbecue in the nation. Well folks, I am more than impressed with Kansas City’s BBQ and it’s all because of Joe’s Kansas City Bar-B-Que.

Like every trip, I do my research and I do it well. I knew I wanted to try some of Kansas City’s best BBQ, but I did not know where. There are hundreds, maybe thousands of BBQ restaurants in Kansas City to try that all swear they are the best. After I researched I found which restaurant was truly the best – Joe’s Kansas City Bar-B-Que. I told Adam I found where we were eating as soon as we landed, he told me let me ask Kyle and see what he says. What did Kyle tell Adam? That Joe’s Kansas City Bar-B-Que was catering their wedding!!! Obviously because they are the best.

Joe’s was going to provide their wedding with brisket, turkey and chicken along with side options, but in my research I found that Joe’s was known for two things – burnt ends and the Z-Man sandwich (Kyle confirmed it too). So, as soon as we landed in Kansas City, grabbed our luggage and got into our rental car, we were on our way to Joe’s!

Joe’s Kansas City Bar-B-Que, was once Oklahoma Joe’s Bar-B-Que and just recently they changed their name, which is definitely more fitting. Surprisingly, the best BBQ in all of Kansas City, if not America, comes from a lucky green, gas station and convenient store. The moment we stepped through their doors we were in line to order our food. As long as the line was, it moved at a pretty fair pace and we were at the front in maybe 15 minutes. Luckily the long line gives you plenty of time to figure out your order because once you reach the front you better know what you want – they want to keep the line moving. We ordered the Z-Man, Hog Heaven, burnt ends and a side of cole slaw. Once you place your order you wait no more than five minutes and your food is ready at the pick up counter. We are not exaggerating, they are wicked fast! 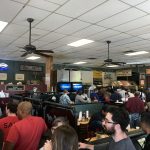 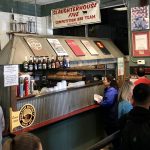 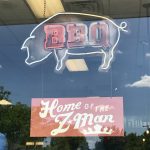 EVERYTHING TASTED AMAZING!!!! Even with all the hype, all the awards, Joe’s was perfect until the last bite. I’m telling y’all, listen to me, “y’all”, I am a born and raised Texan and this Z-Man sandwich was the best BBQ sandwich of MY LIFE! Juicy brisket with crispy onion rings and melted cheese. Do yourself a favor and just visit Kansas City for this sandwich. The burnt ends were also very good. It did not need Joe’s famous sauce, but the sauce was too good pass up. The sauce elevated the burnt ends to another level – so good! Adam’s Hog Heaven sandwich was packed with pulled pork and sliced sausage that each bite he took it felt like it was taking him to heaven. 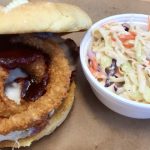 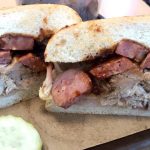 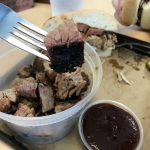 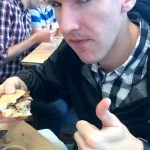 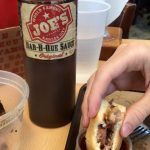 If we did not get enough of Joe’s BBQ on Friday afternoon then we did at the wedding Saturday night and then again for brunch on Sunday! We could have had Joe’s BBQ everyday for a week and even then I do not know if we would get tired of it because their menu is so extensive that there is always something new to order.

Another reason why this wedding was the best – they served Kansas City’s beloved crafted beer from Boulevard Brewery at their open bar. I believe Adam had at least half a dozen bottles of it because he enjoyed it so much. And as if we did not drink enough Saturday night at the wedding, we were ready to do a FREE tour at Boulevard Brewery!

Tickets for the tour are available at 10am and are distributed on a first-come, first-served basis at the Tours & Rec Center Welcome Desk. The tours begin at 10am and take place every hour until 4pm. The tour took around 45 minutes then an additional 15 minutes to enjoy four free beer tastings in the Tasting Room. Our tour guide took us through the history, buildings and beer making process of Boulevard. The tour guide also explained the history and risks that John McDonald had to take to create Boulevard and then to see how successful his little idea became was very inspiring. We learned interesting facts about how much beer one vat can hold or how fast they can bottle their beer for delivery. Other facts we learned were just funny stories about how they can no longer serve Tank 7 because of the high alcohol content. When they cleaned up their Boulevard Event Center after a wedding reception they found a toilet split in half vertically down the middle and a wedding cake not even touched in the fridge. Needless to say, a lot of guests drank too much Tank 7 and after this wedding they no longer had Tank 7 at open bars. 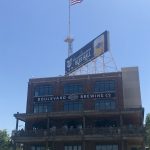 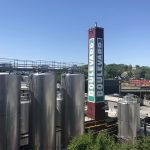 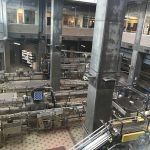 The tour ended in their tasting room bar where we were able to taste popular beers as well as beers that were in the testing phase. If they receive a lot of great feedback there is a chance it could make the shelves, otherwise it remains in the Beer Hall. In the end it is cool to taste a beer first or a beer that could potentially never make it to the market, making it pretty exclusive. Between the two of us we had their Test Cider, Test Berry Ale, Tropical Pale and Wheat (Adam loved the Wheat beer so much his entire tasting was Wheat Beer). 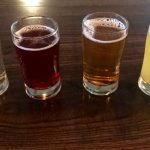 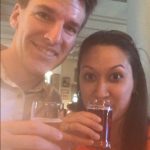 After our tour we hung out at Boulevard’s Beer Hall – a great pace for family and friends to hang out. They have some great food options and their long list of draft beers. They have a cute photo booth where guests can take pictures, fun board games found at picnic tables and a great view of Kansas City’s Skyline from the patio. We bought one of their pretzel dogs, the Bully! Porter Banger – sausage made with beer and spices, served with Pale Ale mustard. It was delicious and the perfect end to our beer tasting. 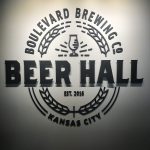 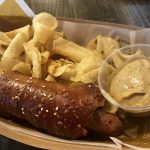 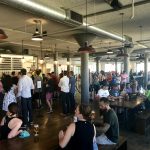 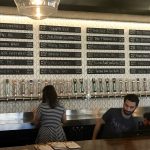 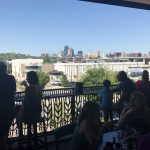 To kill time before our Boulevard Brewery Tour we conveniently drove five minutes to two of Kansas City’s famous city wall murals. One with pink wings, where you can stand in the middle and feel like an angel, the other is a quote written in pretty calligraphy, “Kansas City I’m so in love”. After good BBQ and beer we were in love with Kansas City, so we tried to take the cutest picture we could to represent our love for the city. Here is the address where you can find both murals – they share the same wall.
Location: outside Fortuity boutique in Crossroads
Address: 1919 Baltimore Ave., Kansas City, MO 64108 Joe's sounds very familiar from my time in KC in 2009. One of my favorite cities. My next visit, I was travelling with a vegetarian, so we found different places to eat.

You may have visited when they had its original name, Oklahoma Joe’s Bar-B-Que!

Ah that food looks delicious. ! Lets be honest, you wont find good Barbecue place anywhere else than America! The beer tasting looks great too! Love this wings on the wall! Perfect for photoshoot like this! :)

Haha unless it's Korean BBQ you are probably correct!

Thank you we appreciate it. BBQ and beer is definitely on everyones radar this summer :)

Wah just your pictures made me craving that BBQ and beer... I'll def come back to get that address when I'm heading to Kansas. Keep exploring :)

Joe’s Kansas City Bar-B-Que does look like a unique BBQ place. I have visited BBQ restaurants before whilst traveling that I've visited again and again over the whole holiday period. I'm curious to try the Joes BBQ sauce!

Oh then you should definitely try Joe's Kansas City BBQ if you are ever in Kansas City. It is the best we have ever tried!