Going to Normandy was something on Adam’s “To-do List” and after experiencing this tour ourselves it should be on everyone’s list as well. I am not a history buff, but there were many moments during this tour where the history and stories took my breathe away and I became overwhelmed with emotions. The Normandy tour is very moving and rewarding to see the historical monuments and places firsthand. Here is our experience….

We booked our Normandy tour through Normandy Sightseeing Tours and they did a phenomenal job. We are not one to book group tours because we like the intimacy with what we are discovering, but with Normandy Sightseeing Tours it was a small group of 8 people – a perfect tour group size. Each group had their own van and a personal tour guide and never intertwined to make the group bigger. Normandy Sightseeing Tours has seven different D-Day tours to choose from depending on: the length – morning, afternoon or full day, to the different locations – Omaha Beach, Gold Beach, U.S. Beaches only, British Paratroopers and Sword Beach or Juno Beach and Canadian Cemetery. We chose to do Omaha Beach during the afternoon which included: Pointe du Hoc, Omaha Beach, American Cemetery and the Visitor Center.

Normandy Sightseeing Tours pick up their guests at the location of your choice in Bayeux, France. Six out of the eight people in our group were picked up at Bayeux train station which was the most convenient. The tour starts as soon as we were all in the van, our guide (unfortunately I forgot his name) introduced himself as did the guests to break the ice. We then got straight into history topics as he drove to our destinations. During the tour, our guide would discuss the history of events at each location we were standing on that made us grasp the reality of the traumatic war. Our tour guide was very thorough and had a binder full of pictures from the war to help us understand the tragic events. He spoke English very well and was always able to answer everyones questions with confidence. After our guide would walk us through history he allowed us to explore the grounds of each destination on our own. The tour itself took about five hours and never felt rushed, it was plenty of time to sightsee.

A 30-acre battlefield with the remnants of D-Day. Walking through this battlefield was incredible! We were able to see a number of bunkers still intact and actually walk inside them. It was an unbelievable feeling and experience to be standing in the bunkers used in WWII. 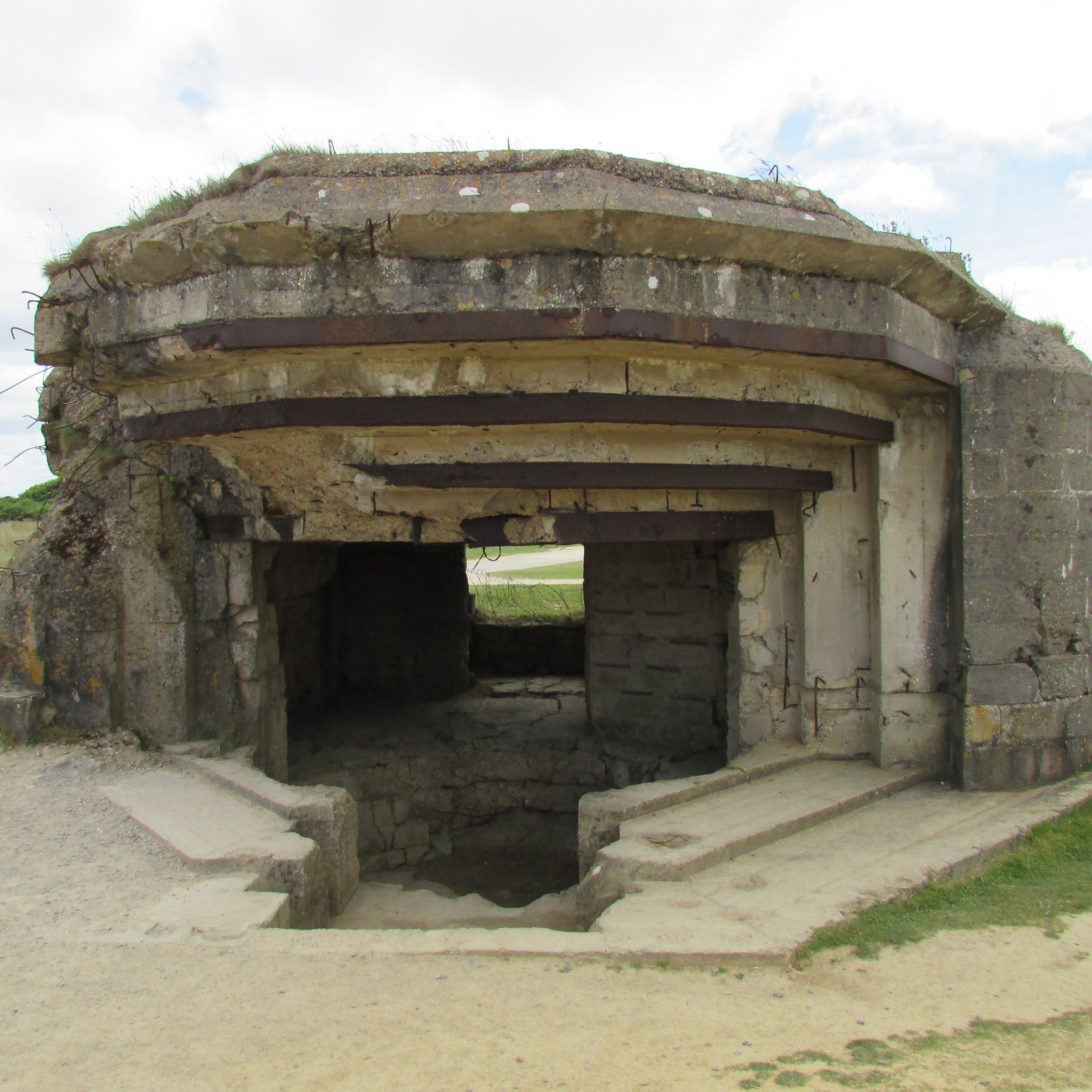 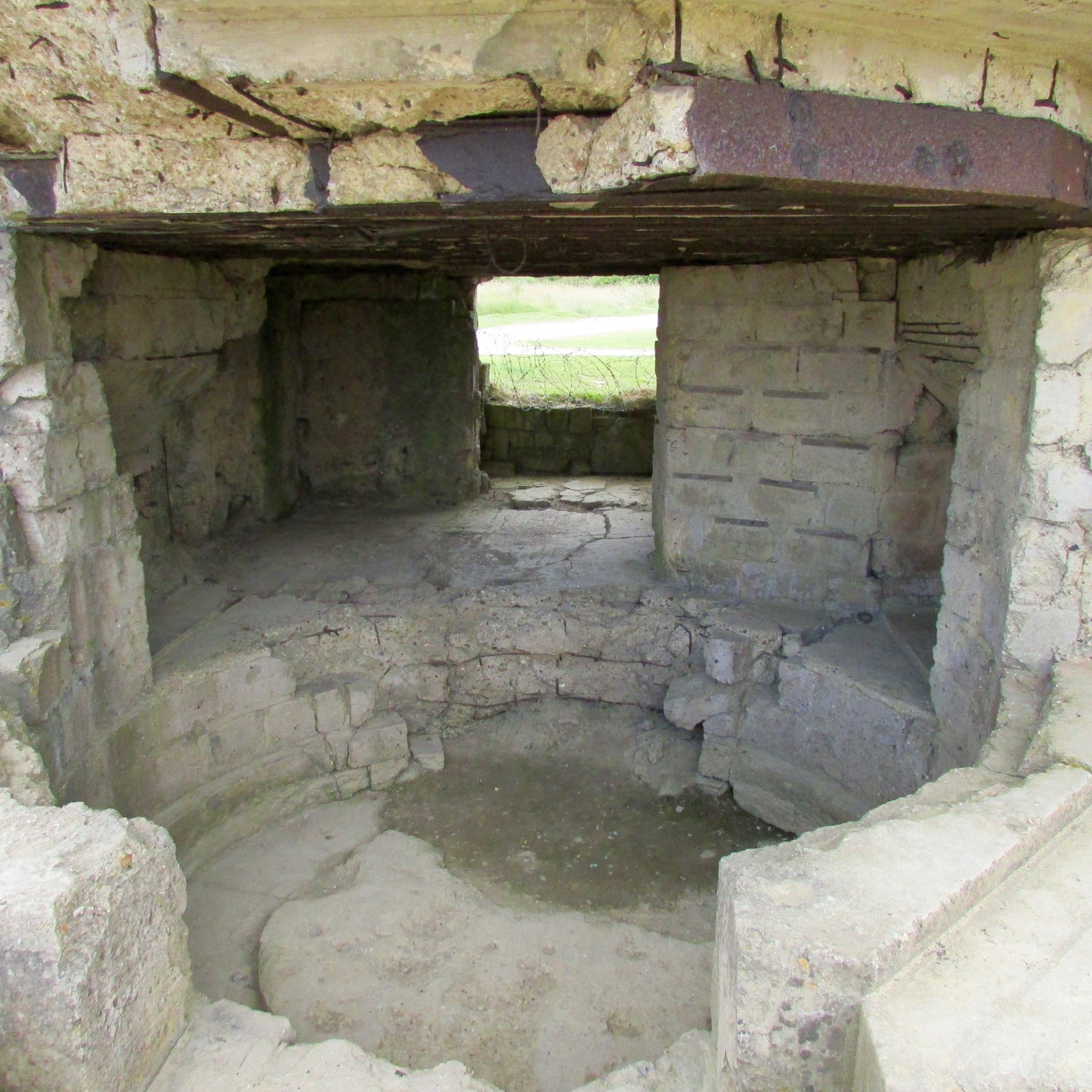 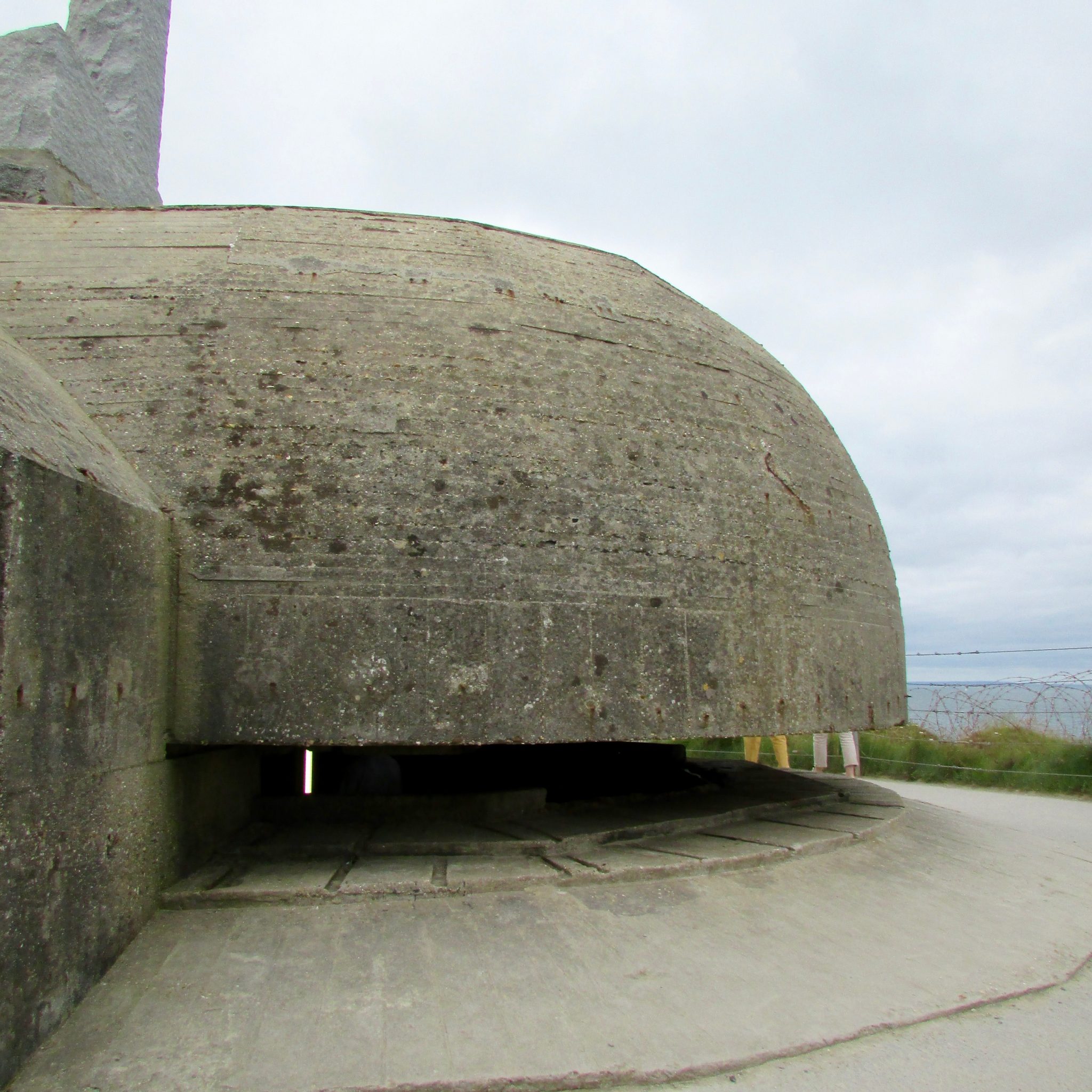 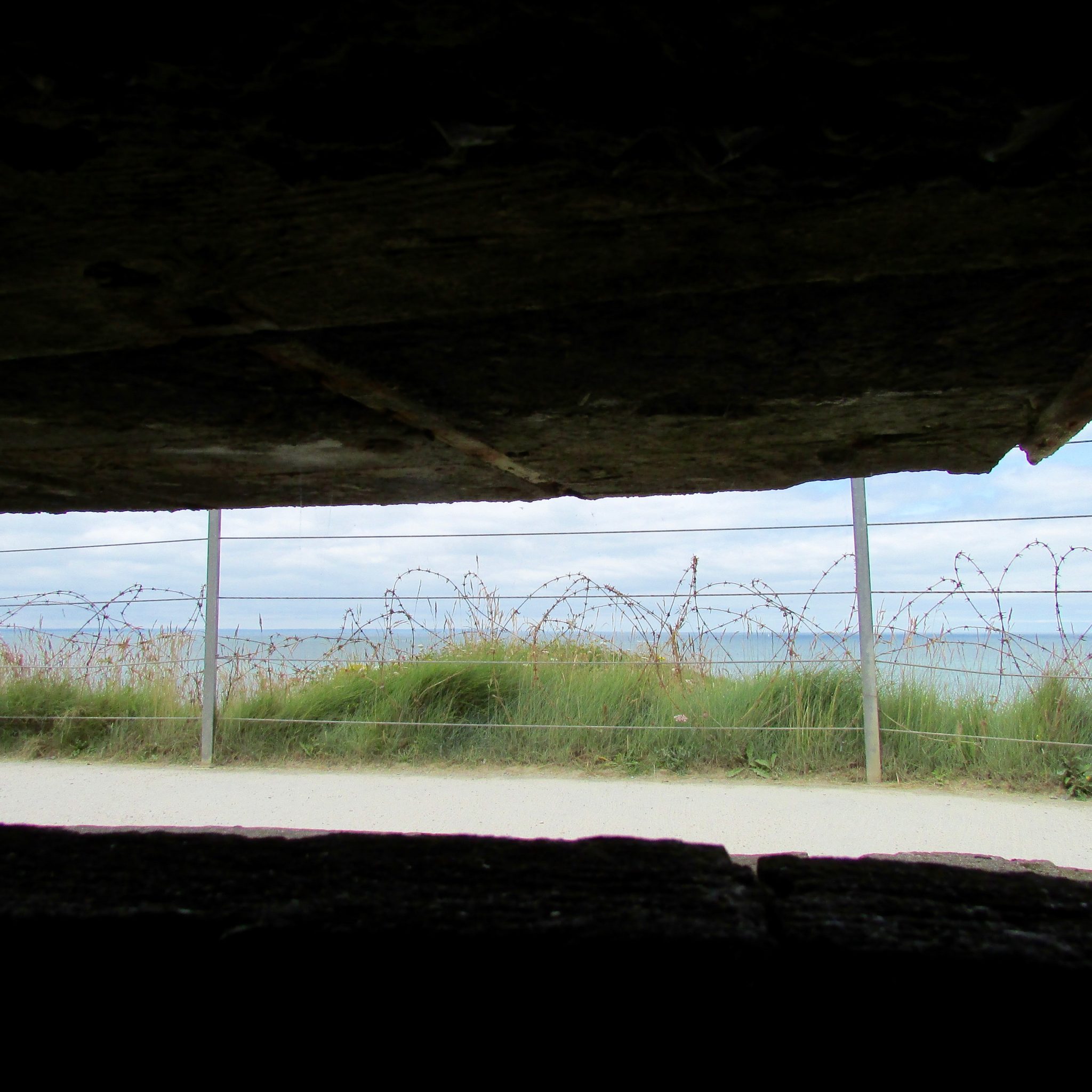 Almost everywhere we walked there were bomb craters ranging from small to ginormous. They truly blew us away with how big they were. Adam is 6’2” and when he stood in the middle of the bomb craters he looked like an ant. 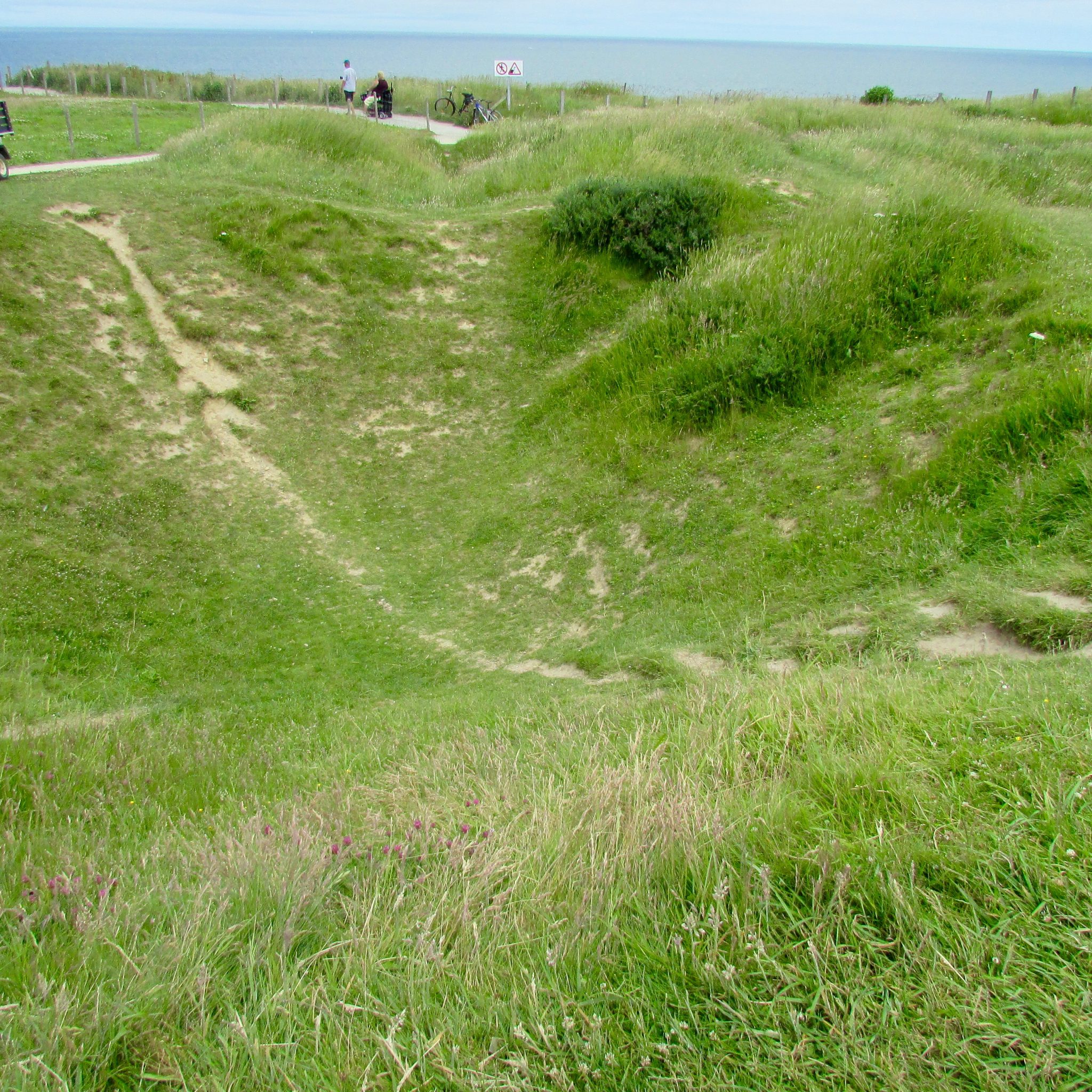 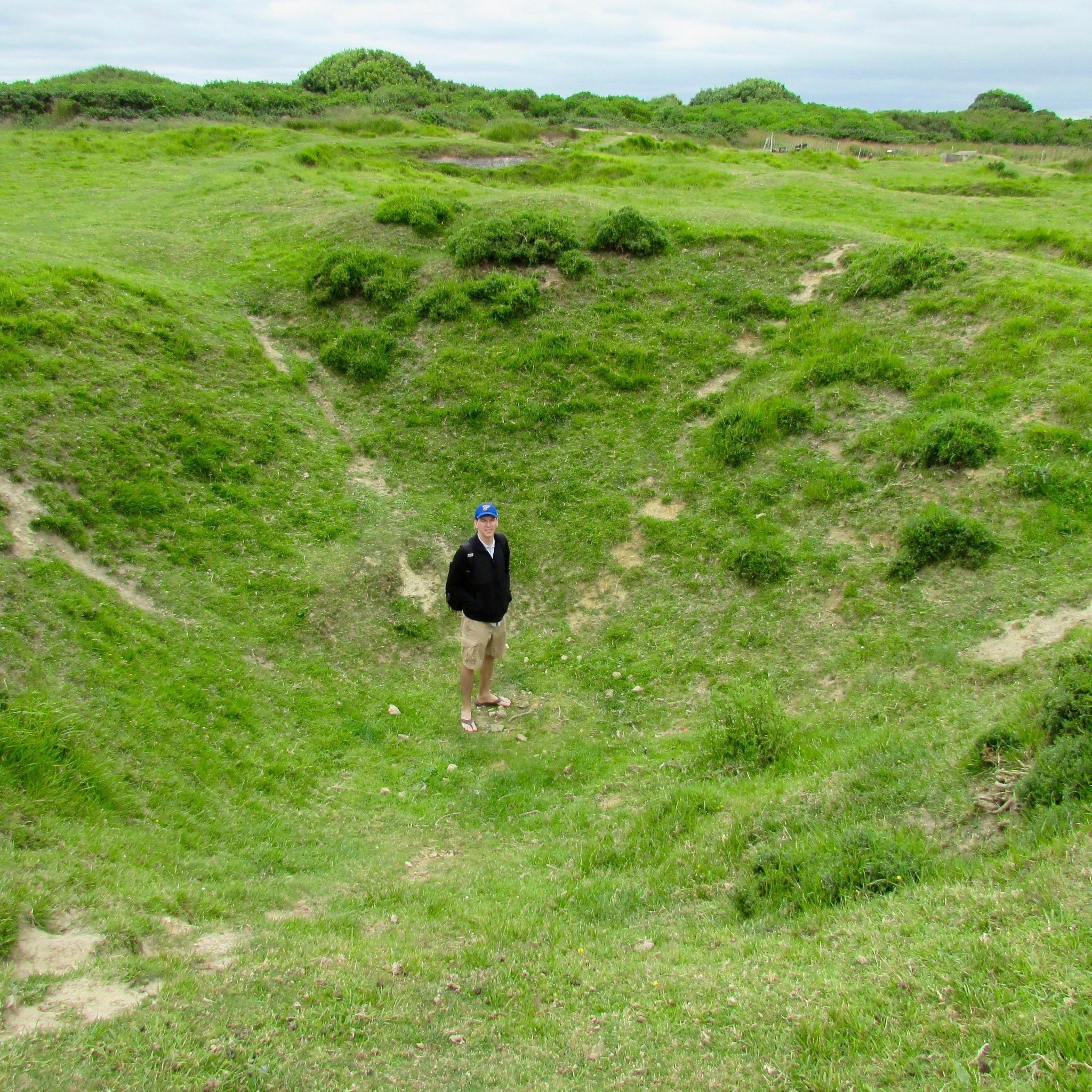 The day we were here it was a little chilly and windy so when we walked towards the cliffs we got a beautiful view of the ocean. When the wind moved we embraced the moment knowing that brave soldiers fought and died to keep this world a better place. 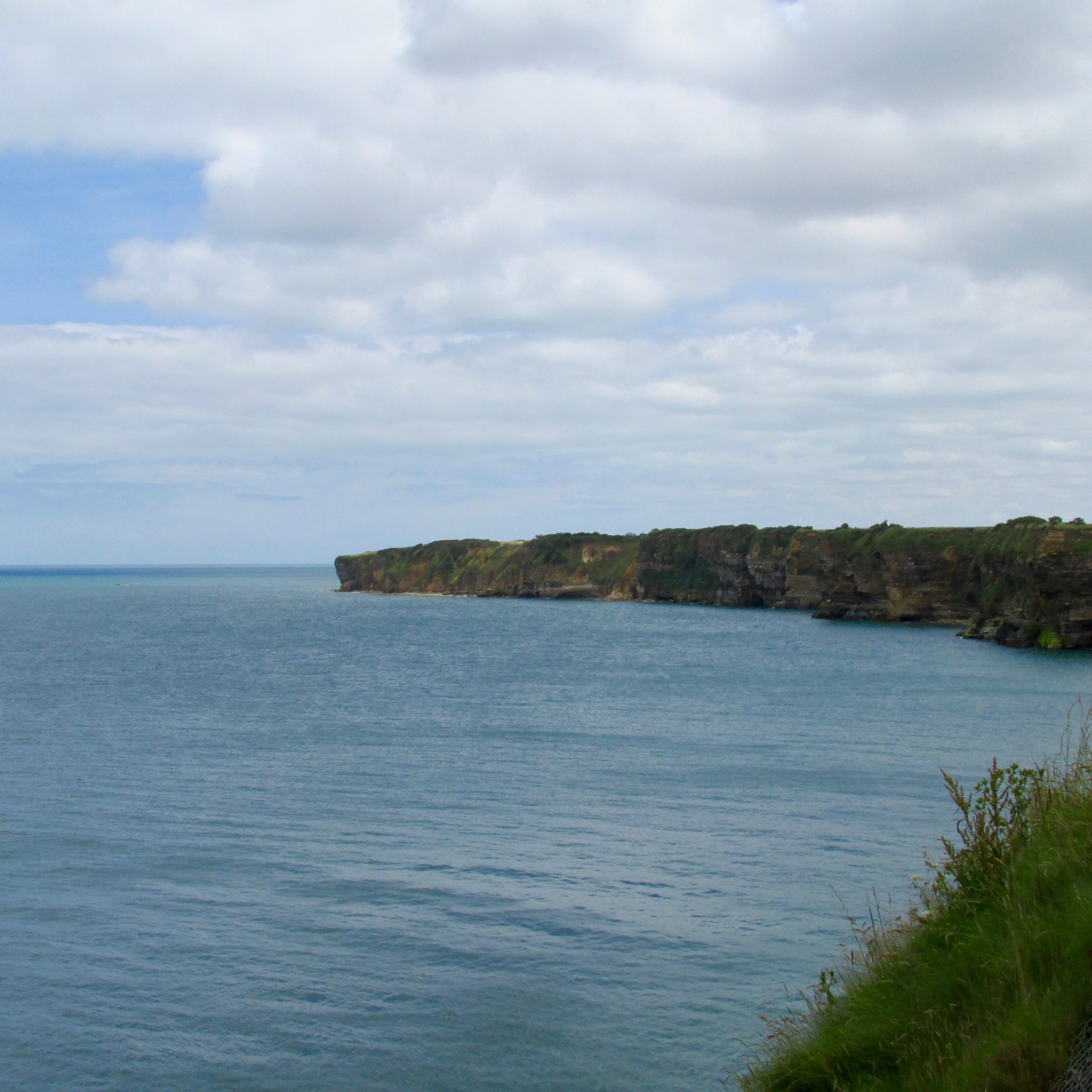 At the cliff was the Point du Hoc Ranger Monument dedicated to the American Second Ranger Battalion under the command of Colonel James E. Rudder who attacked and took possession of the Point du Hoc. Yes, this was a moving moment and a great honor for everyone here, but this was even more meaningful to me because I am an Aggie, a graduate of Texas A&M University. Colonel James E. Rudder is one of the biggest names in Aggie history, he was the sixteenth president of Texas A&M University and he is the one who turned the all-man college into the fighting Texas A&M University it is today – seeing this, being here, was a very rewarding moment for me. Whoop! 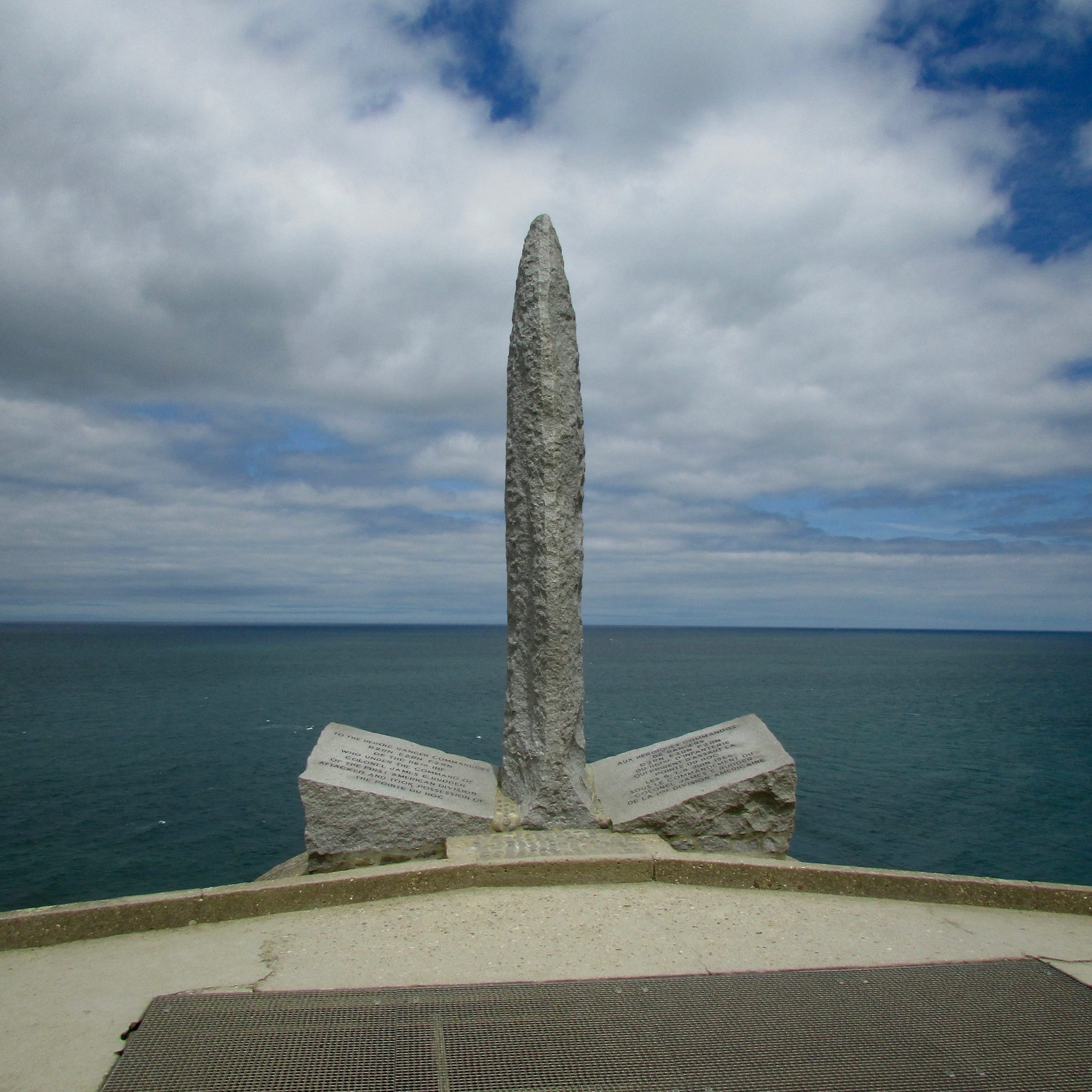 I will be honest, when we booked this tour we were both excited for this part specifically because of the movie, Saving Private Ryan, knowing the historical moment and we expect to see the barriers still in the sand. So when we arrived to Omaha Beach we were very disappointed to find the barriers were removed and the beach had become a vacation spot. Yes, families and children were playing in the sand knowing what took place there. Before the war, Omaha Beach was used as a vacation spot for locals and once the war ended they reopened it to be used for its same purpose – a vacation spot. So when we look at it as dishonorable, France sees it as a place where men fought to keep peace on their land. Today, people embrace the victory by celebrating life and happiness. Our tour guide also explained that because so much of the war was fought in France, if they were to designate every battlefield a monument or memorial then most of France would be a bunch of ghost towns. France had to rebuild where battles were won. With that said, France did build a memorial to honor those who fought in WWII to claim victory on D-Day. If you Google “Omaha Beach now and then” you will see photos during the war and photos after the war; to see where soldiers stood fighting, to where tourists playing on the beach today. 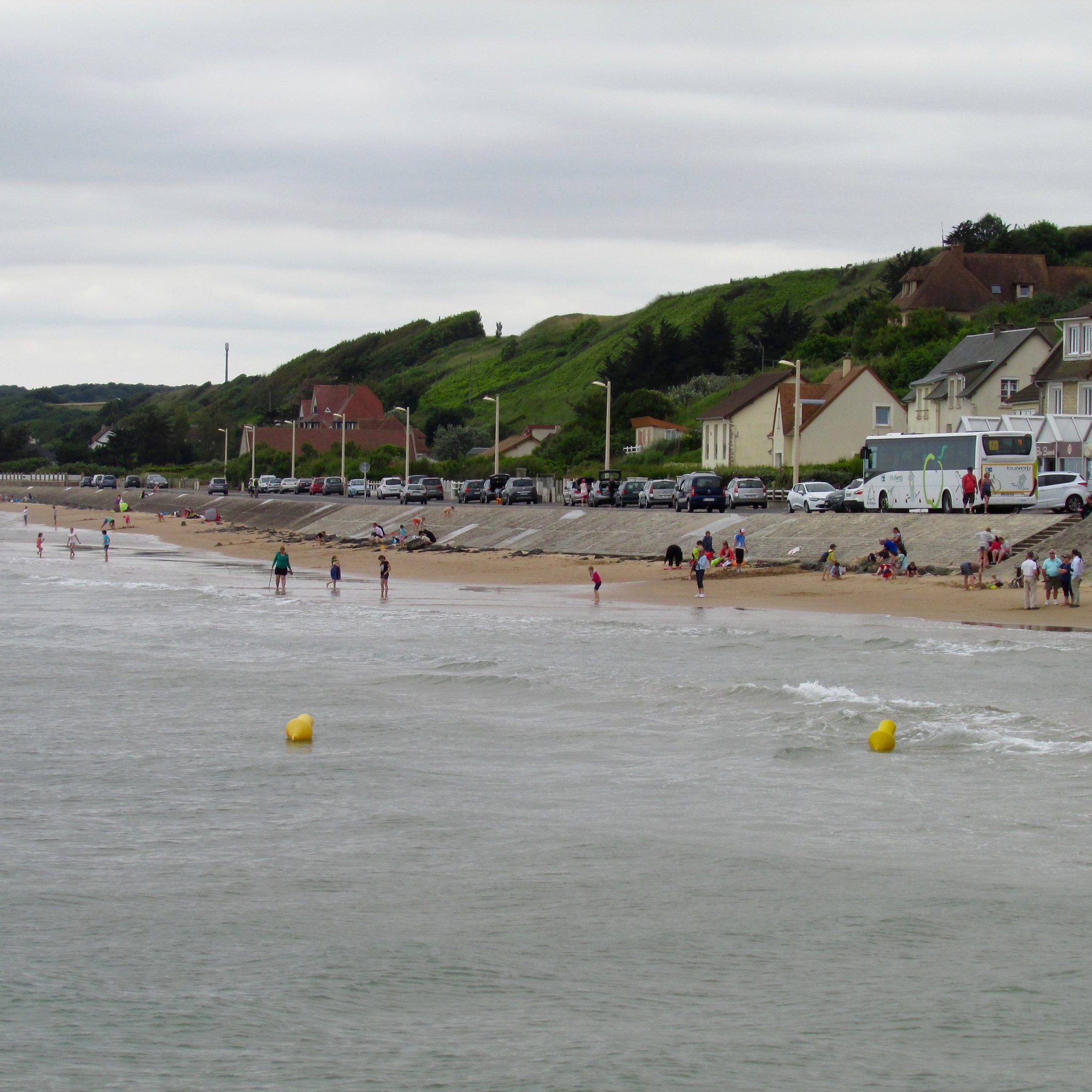 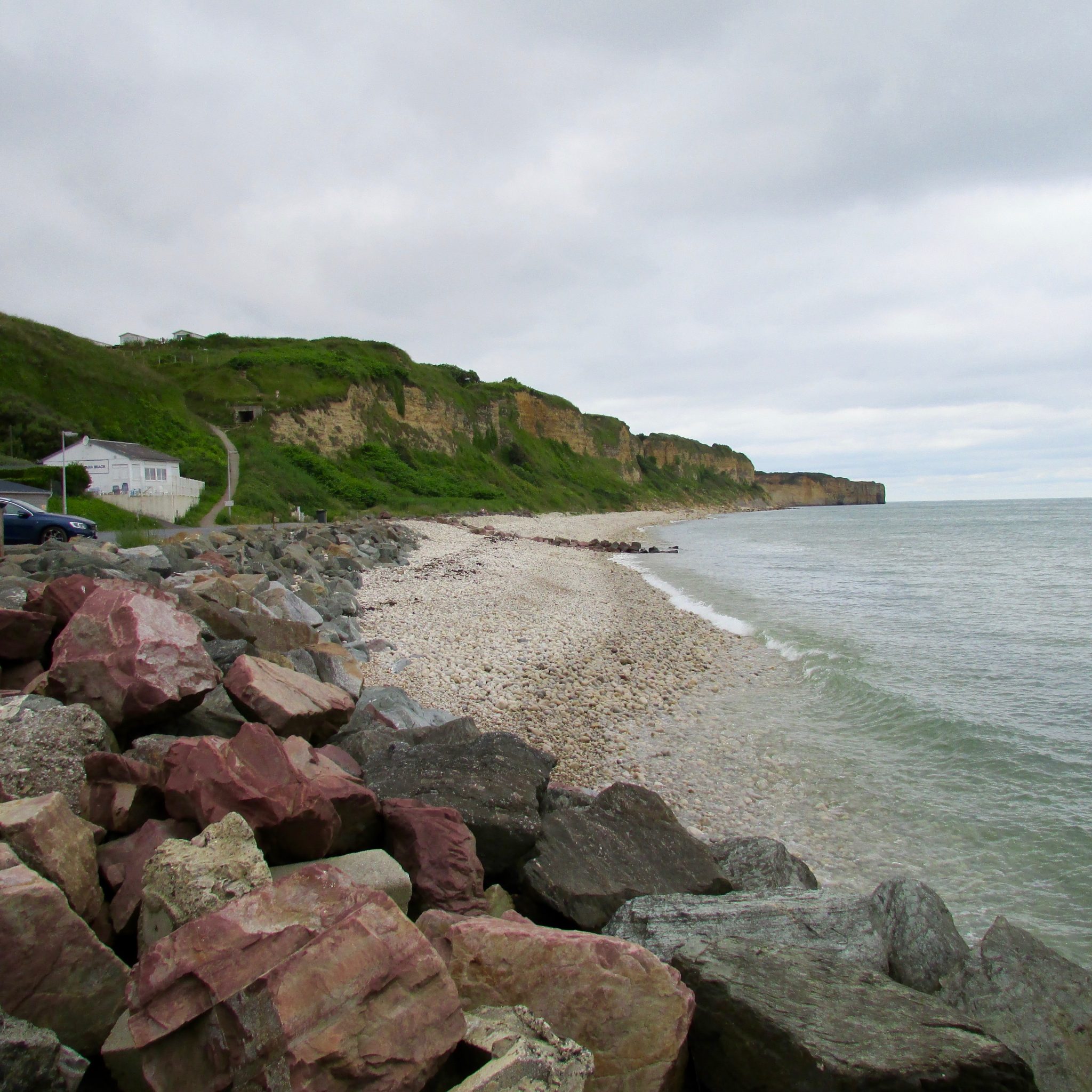 On the beach is Les Braves Memorial which represents three elements: The Wings of Hope, Rise Freedom, and the Wings Of Fraternity. It is a very beautiful memorial and near the memorial is where Adam collected his sand for keepsakes – probably our most valued sand. While we were standing in the sand with our back towards the water we took a moment of silence to visualize where our soldiers fought. It was another moving experience that we will never forget and never take for granted.

The Omaha Beach Liberation Monument was built just off the shore to honor the landing of the 1st Infantry Division and the 116th Infantry Regimental Combat Team of the 29th Infantry Division. On both sides of the monument are the flags of every ally. 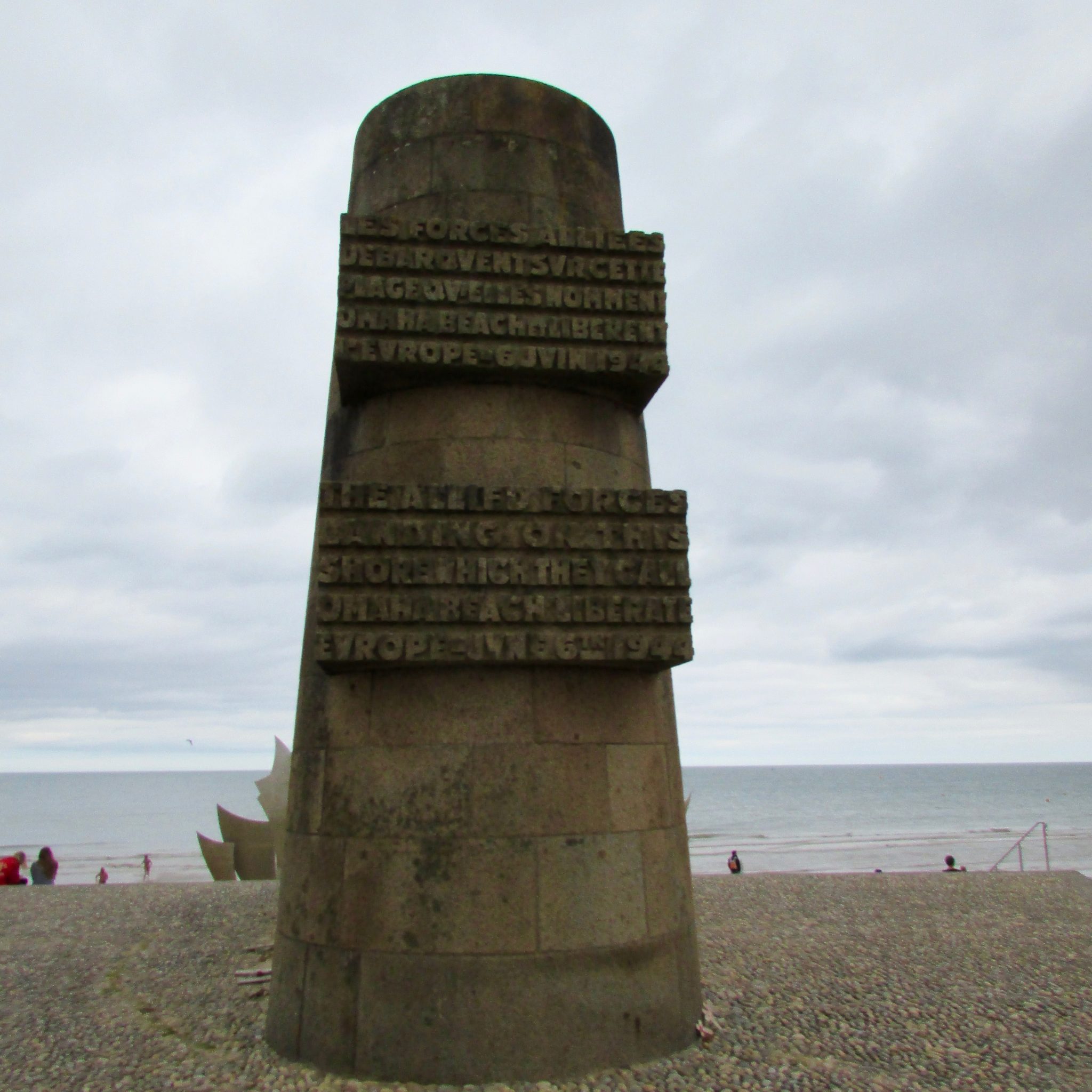 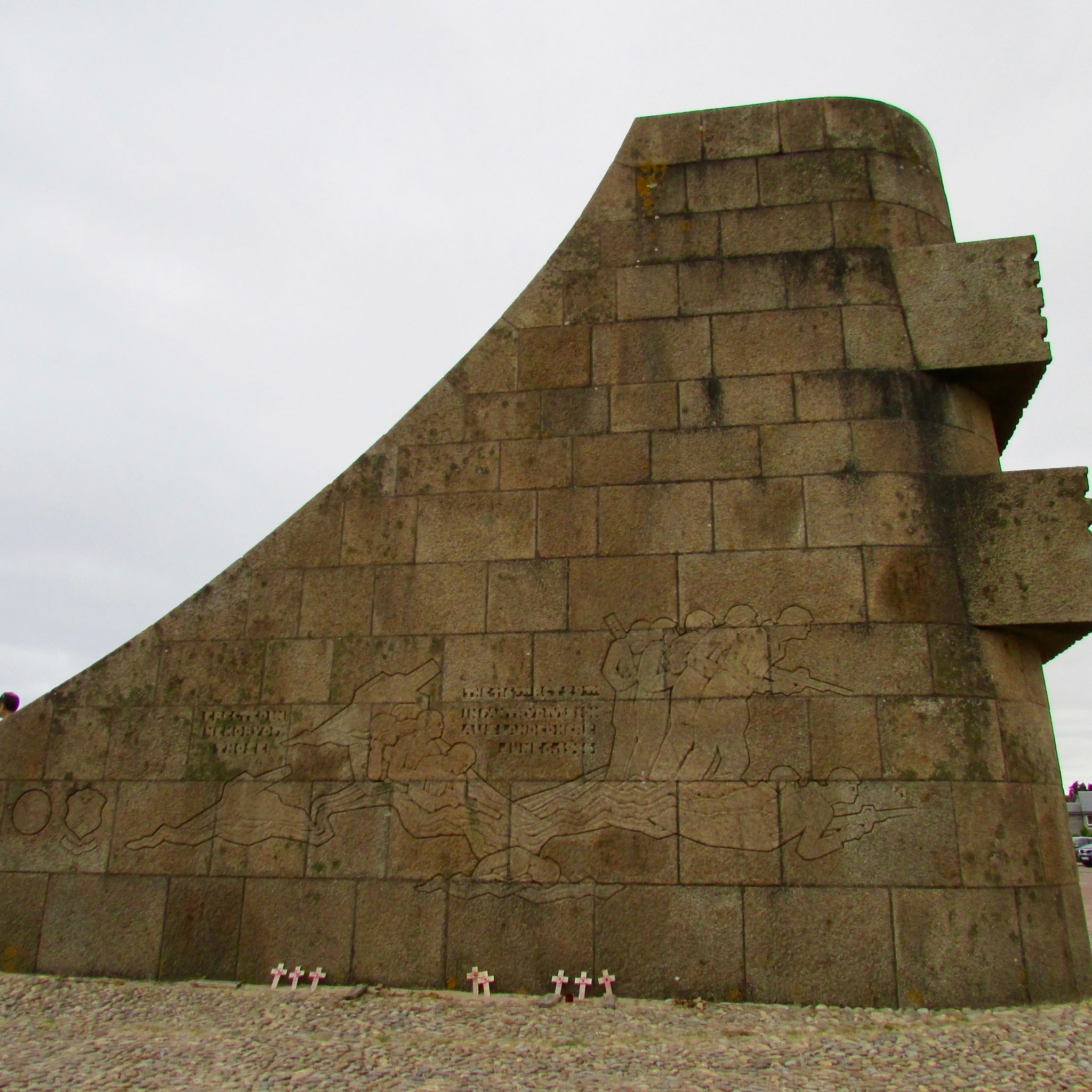 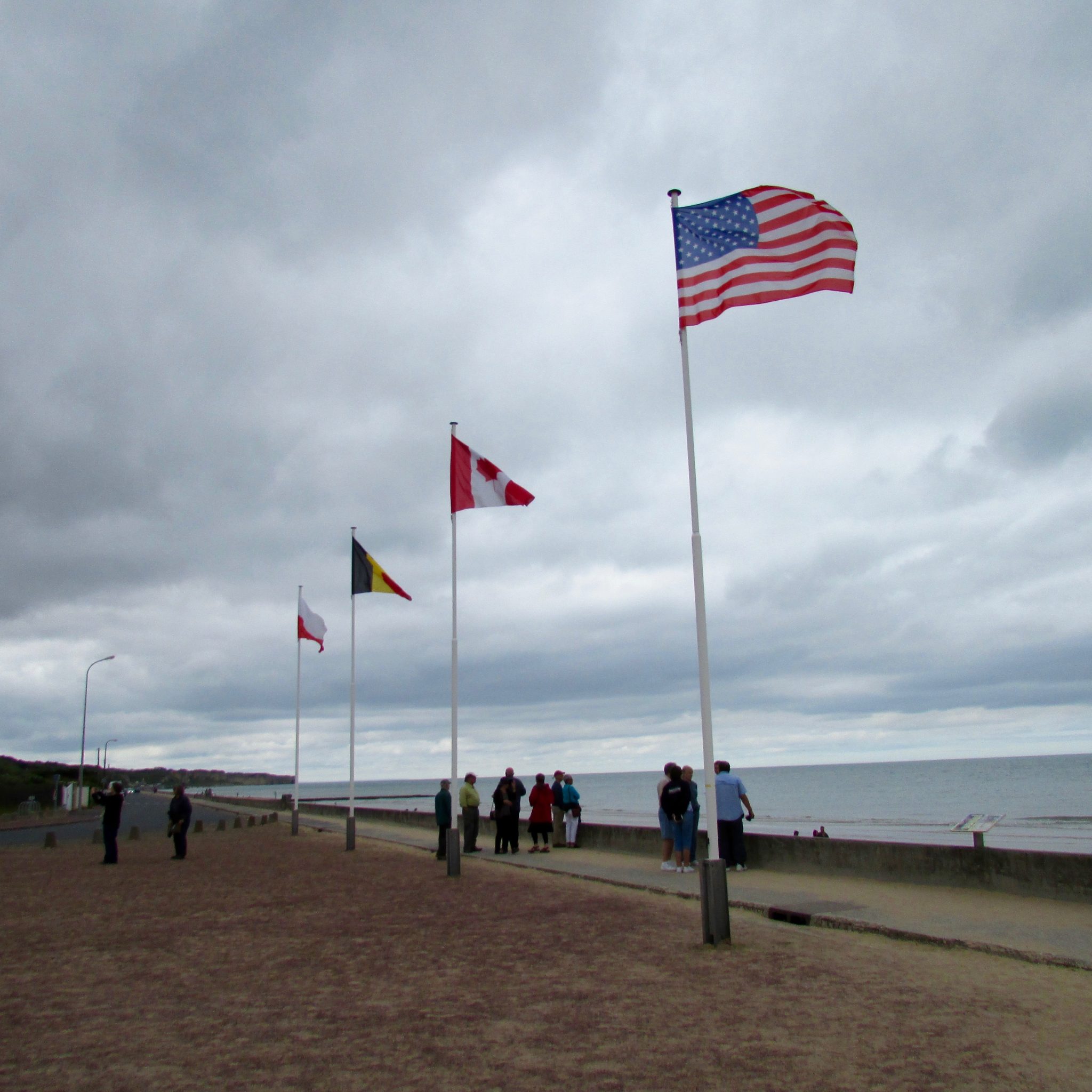 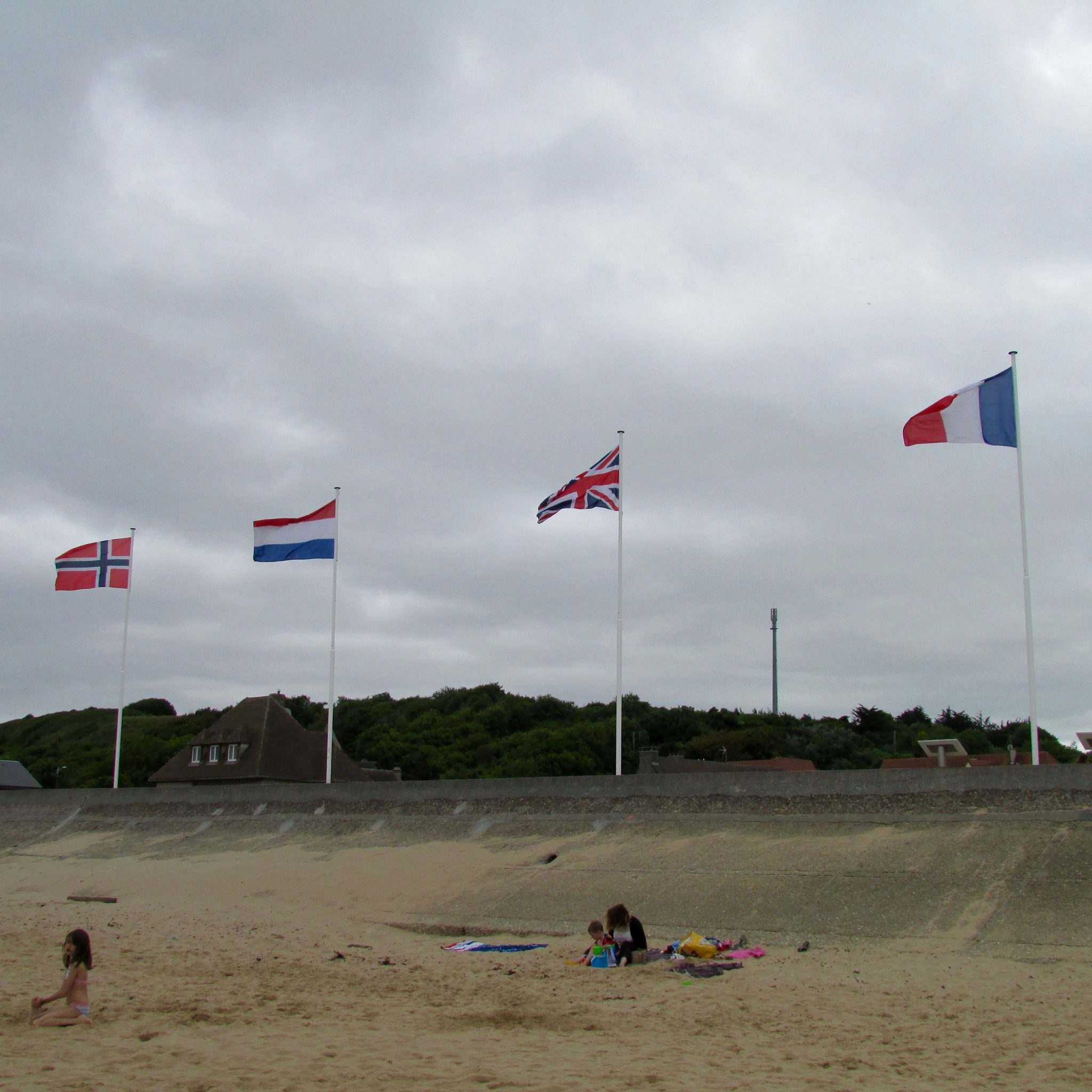 Our last stop on the tour was the American Cemetery and the Visitor Center. We never went inside the Visitor Center because we were so moved by the cemetery, but we have heard good things about it. As soon as we saw the cemetery I was overwhelmed with emotions and almost broke down in tears. The cemetery includes white marble gravestones overlooking Omaha Beach (the graves are shaped into latin crosses for Christian soldiers and the Star of David for Jewish soldiers) and includes a memorial of the Walls of the Missing, a reflecting pool, and a chapel (includes Christian and Jewish faith) in the center of the cemetery. 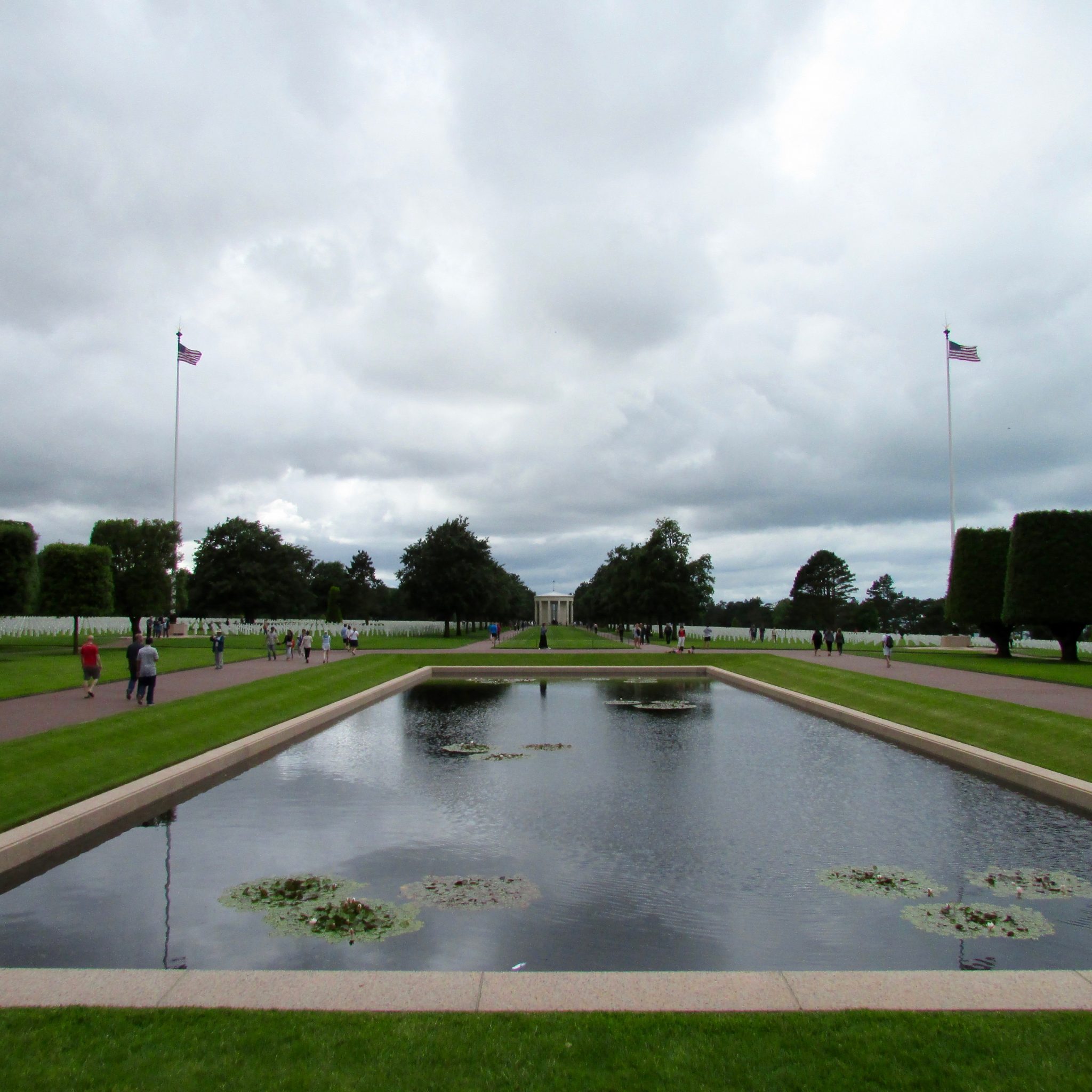 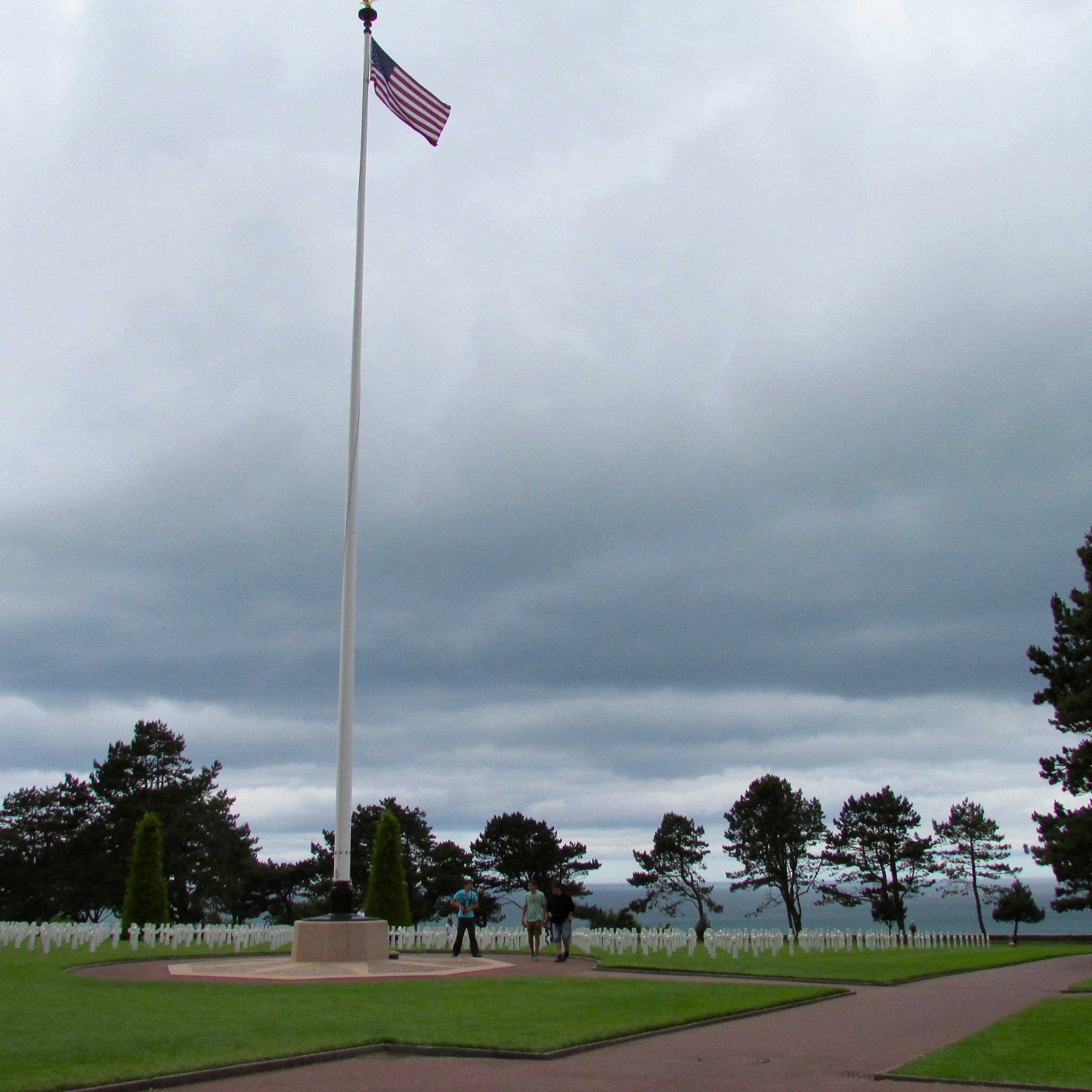 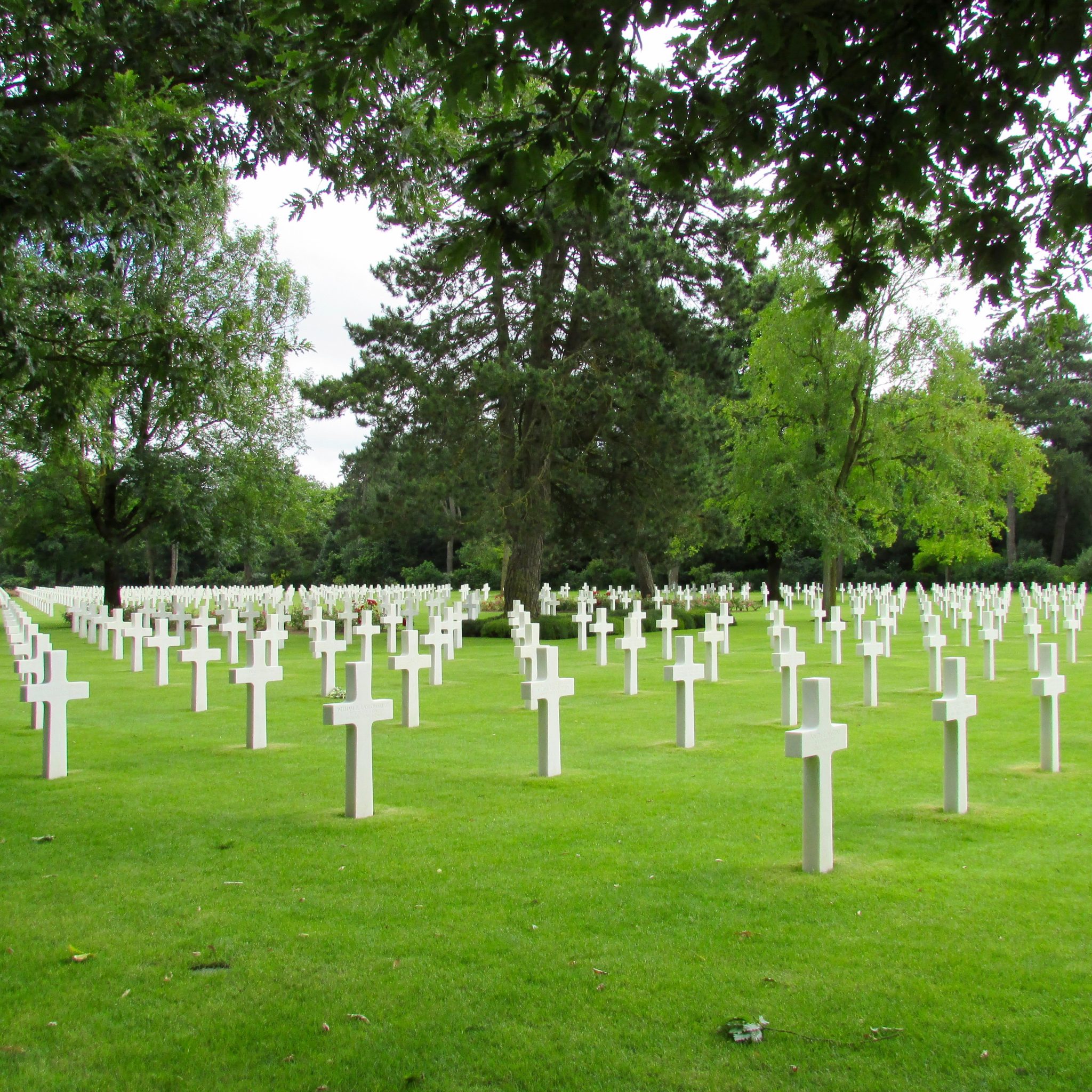 The memorial of the Walls of the Missing included 1,577 names. Some names have rosettes marked next to their names because those were ones that have been recovered and identified. The memorial is beautiful and can be found in a semicircular garden with the monumental sculpture “The Spirit of American Youth Rising from the Waves” in the center. Maps of the landings on Normandy Beaches and air operations can be found on the sides of the memorial. The memorial overlooks the reflecting pool, chapel and gravestones. The center of this memorial gives guests a great view of the memorial and the cemetery. 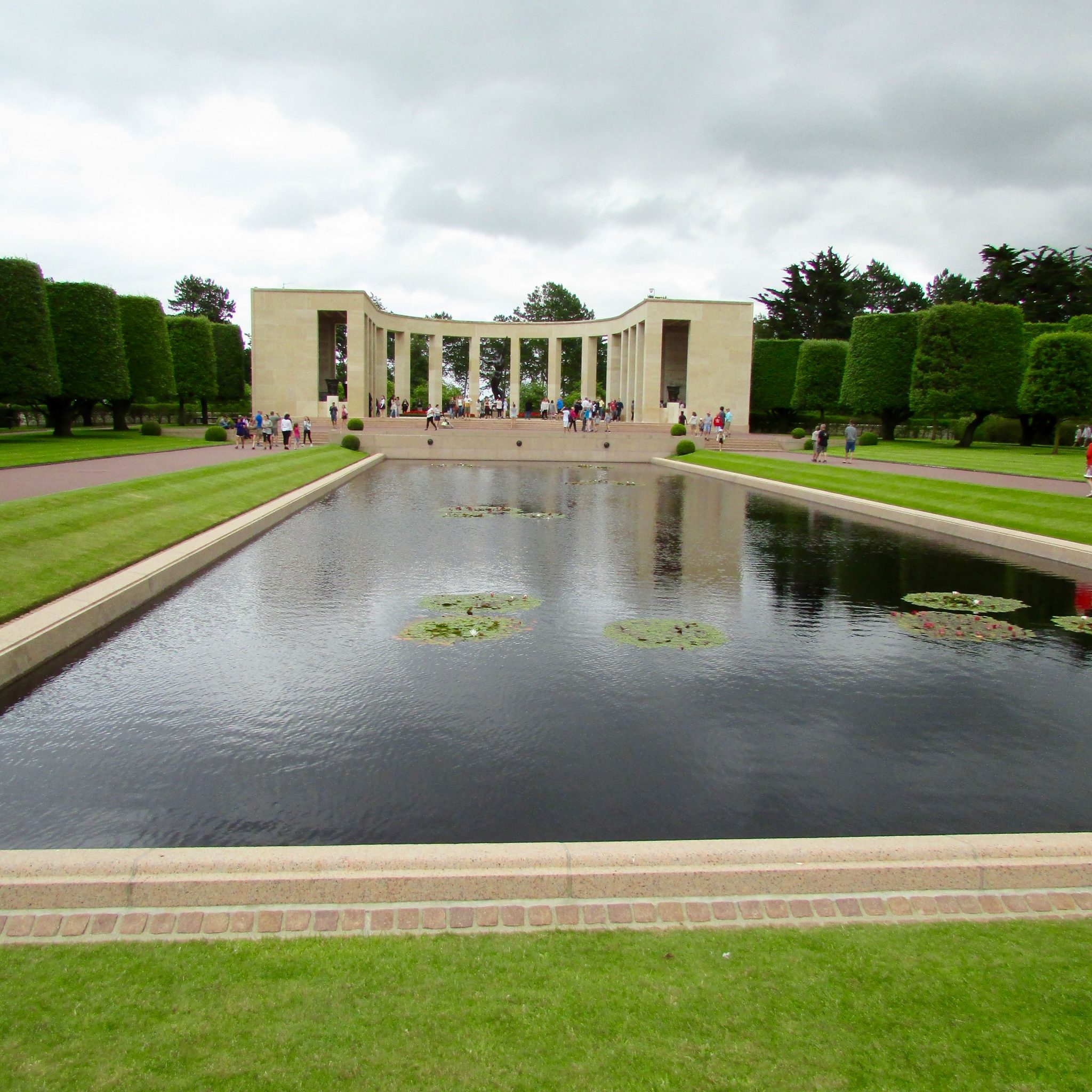 We walked almost every pathway in the cemetery, appreciating every soldier’s gravestone and their sacrifice. We were told that the next of kin were able to decide if they wanted their loved ones to have a proper burial in the United States or in Normandy.

Overall we really enjoyed this intimate tour and learned more than we imagined. In the 77 days we were in Europe this remains one of the highlights of our trip. I highly recommend Normandy Sightseeing Tours to anyone wanting to get the most of out of their experience and learn more about the invasion of Normandy.

Sweet Crepes with Banana and Nutella - Our Sweet Adventures

[…] the 13th century in Brittany, a northwest region in France. In fact, we enjoyed crepes during our journey to visit the Normandy WWII beaches near Bayeux, France. Today, you can find crepes all over France. Moreover, you can find sweet […]

[…] that Paris was home to us because everyday we traveled by train to different cities, such as, Normandy, Bayeux, Giverny and Versailles. After long days of sight seeing and traveling it was always […]

It always excites me to visit historically-rich places. Normandy is on my list for the exact reasons. Those bomb craters look crazy and such a pity the beach was disappointing. Would be nice to go to a film location though.

You will love Normandy then! The beach is so long that there is an area where you can enjoy the memorials and have a moment of silence.

Really nice and detailed post guys, in each part. I only visited the southern part of France, so I hope to visit the northern one soon...Anyway as I can see from how you described Omaha Beach and the American cemetery it was surely a touching moment

Thank you. We really appreciate your kind words. It sounds like we have seen the opposite of each other, we have only seen the northern part of France while we stayed in Paris. Would love to see southern France!

This experience - along with a visit to Mont St. Michel - is at the top of my list for when I visit France. It must've been especially humbling to visit on D-day itself. I'd read about an experience where they take you around the sites in a WWII jeep. Do you happen to know how it is?

Hi, I do not know about a tour that takes you on a WWII jeep, though that sounds awesome. We wanted to visit Mont St. Michel, but it time did not allow us to do everything in one day. Oh well I guess we have to go back :)