Gossip Girl here, your one and only source into the scandalous lives of Manhattan’s elite. Spotted – Adam and Christina from Our Sweet Adventures checking into Chuck Bass’ Empire Hotel. I wonder what brings them into New York City and what they think of The Empire Hotel. You know only I have the answers for you, so stay and read more to get all the juicy details of The Empire Hotel.

You know you love me, XOXO Gossip Girl. 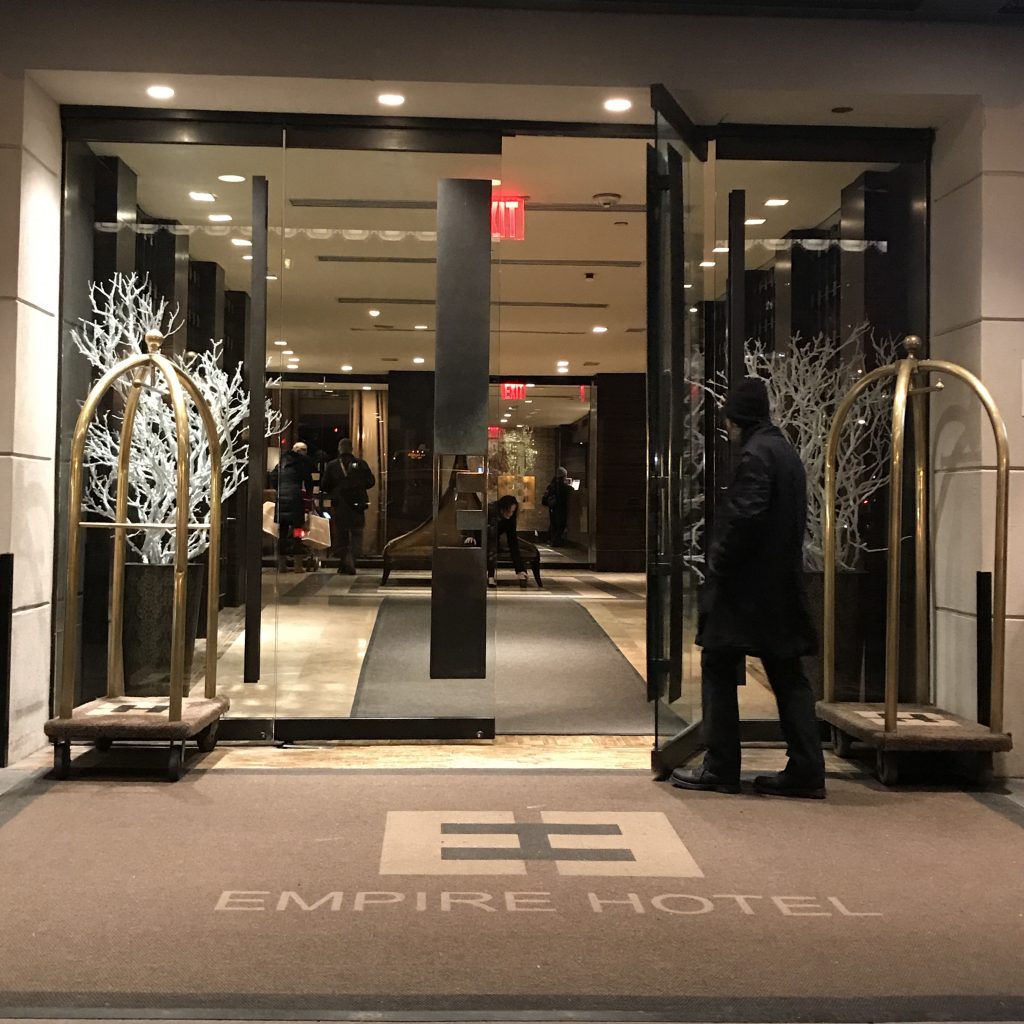 Full disclaimer –  We received a complimentary upgrade and a bottle of champagne from the Empire Hotel. As always, our opinions are non-biased and our own. Our post contains affiliate links. We want to thank the Empire Hotel for their generosity.

When you click on some links on this post, you will have the option to book this hotel at no extra cost to you, but we would receive a small commission. We want to thank everyone for following and supporting us on all of Our Sweet Adventures.

Regardless of why I wanted to stay here, The Empire Hotel is truly one of the best places to stay in New York City. We all know that sometimes when we have high hopes, they can easily be let down, but The Empire Hotel did not let me down one bit and let me tell you why! 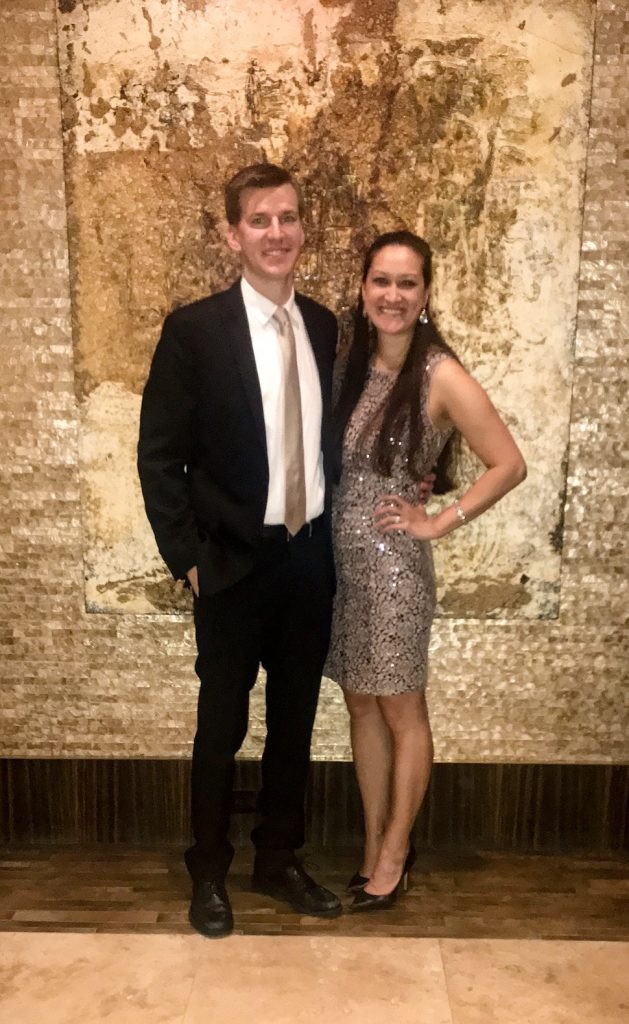 The Empire Hotel’s chic, neon red sign is an iconic part of New York City. Of course, it is not as iconic as the Empire State Building, but it still signifies New York’s City’s history as one of the oldest hotels in the city. Moreover, it is a distinct Gossip Girl location!

In 1889, a seven-story building was built from the ground up, which would later turn into The Empire Hotel. In 1908, Herbert DuPuy purchased the building and in 1922, he decided to tear the original structure down to build a 15-story building. A year later, on December 5, 1923, The Empire Hotel opened with its iconic neon red signage on top of the rooftop that still remains today.  The hotel remained untouched until 2007 when it received a refurbishment to redesign the interior. Since then it has the  1920’s chic and luxurious black and gold patterns with dim lighting to set a romantic ambiance. An atmosphere Chuck Bass highly approves. 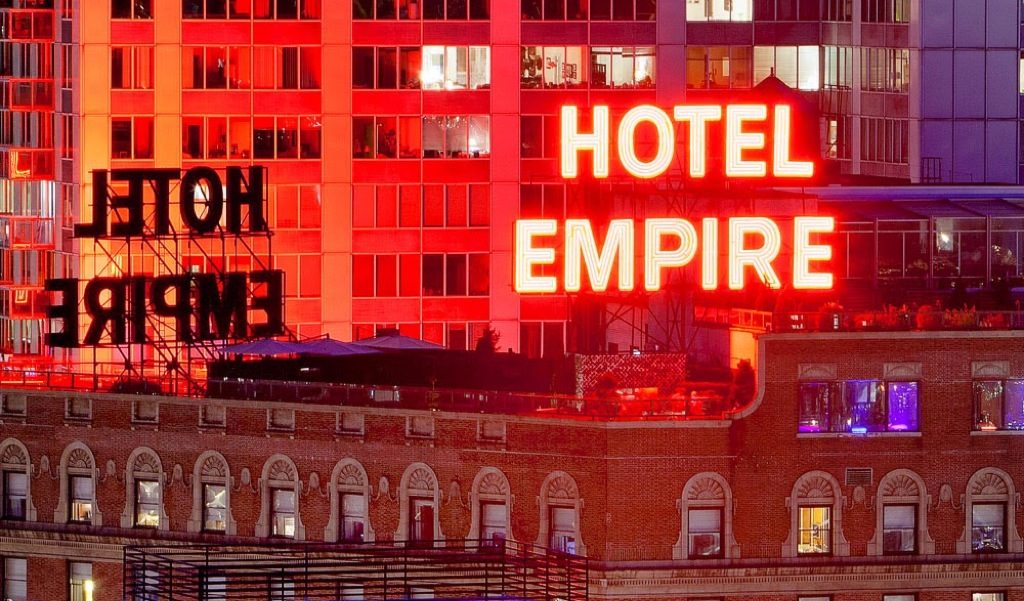 photo courtesy of The Empire Hotel

The Empire Hotel is a four-star hotel in New York City, so it goes without saying that the guest service was superior. From the moment we checked in, till the moment we checked out, the front service team was always ready to offer a helping hand. Whether that was taking our pictures till it was perfect, to helping us get our bearings in the Big Apple, or holding our bags even after we checked out – The Empire Hotel’s guest service was excellent. 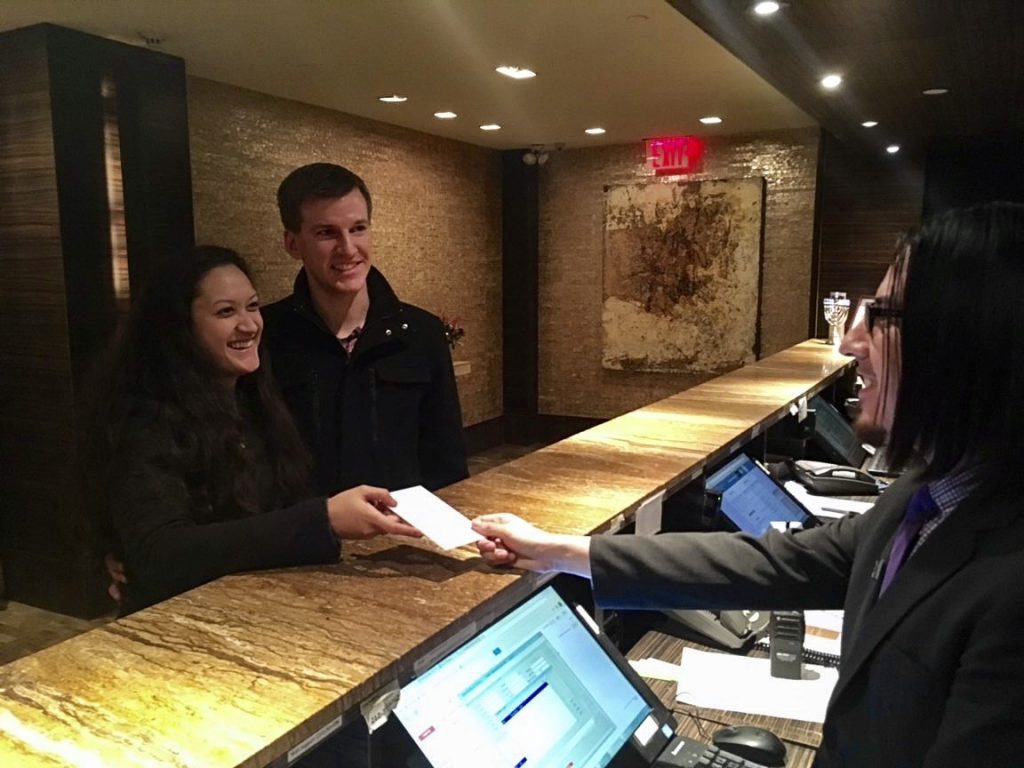 The Empire Hotel even went above their standards by providing us with complimentary Wi-Fi in our room, upgraded us from a standard queen room to a superior king room and gave us complimentary champagne! It may not have been Chuck Bass’ penthouse suite (which actually does not exist at the hotel), but we certainly felt like Chuck Bass with all the special complimentary features. 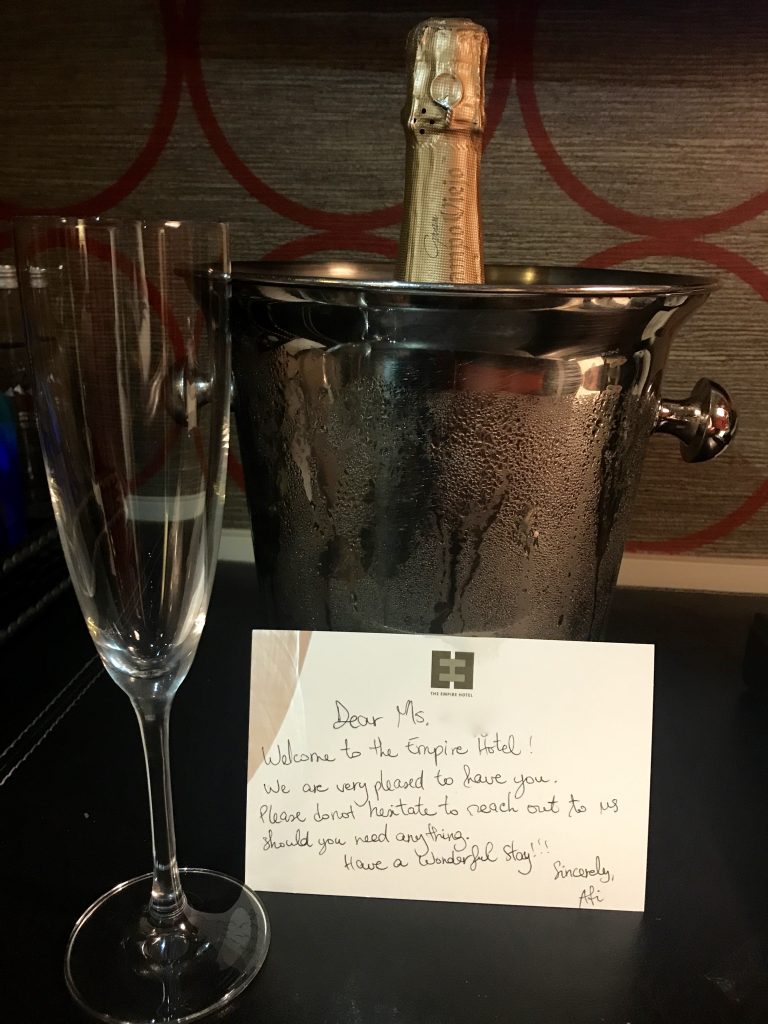 Another characteristic we appreciated from the staff of The Empire Hotel was that everyone greeted us. Every time we saw an employee we were welcomed with a warm and sincere greeting. The doormen were also always welcoming and asking if we needed anything on our way out into the city. There were plenty of reasons why we enjoyed our stay, but it’s the small touches that really made The Empire Hotel shine.

As soon as the doormen open the double doors and you walk into the lobby, you instantly feel a little more luxurious. The lobby is decorated in classic black and gold with neutral hints of a coffee and cream color. There was also hand-crafted metalwork of bronze, brass, and copper that fully brought the ambiance into the 1920s vibe – think The Great Gatsby.

A long, grand staircase is hidden in the back of the lobby that would make any entrance jaw-dropping. Plush chairs and sofas are placed parallel to one another accompanied by modern tables. The lobby is also draped with ceiling-high bronze-colored curtains and beautiful light fixtures. It is no wonder why Gossip Girl filmed so many scenes here, the lobby is absolutely gorgeous. 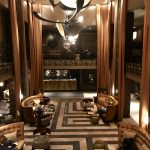 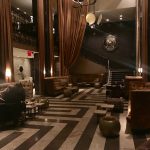 Behind the lobby is the famous Lobby Bar, where not only Gossip Girl was filmed, but also Sex and the City 2. Grab a chair and order the signature Chuck Bass cocktail – it is delicious!

photo courtesy of The Empire Hotel 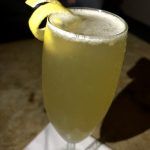 As previously mentioned, we were placed in a superior king room. We were prepared for a small room, but the room was actually a comfortable size for being in New York City. It had everything we needed:

The bathroom was a little small, but not to the point where we felt uncomfortable or cramped. The overhead shower was phenomenal, exactly what we needed after a full nights worth of ice skating at the Rockefeller Plaza. Not to mention the bed with 100% cotton linens and a wonderful pillow to sleep on. We could not have asked for anything more. 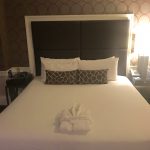 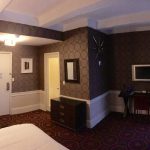 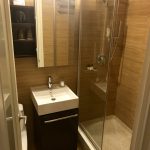 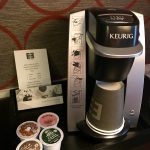 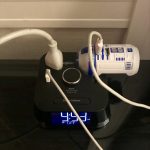 The Empire Hotel also has a restaurant, Ed’s Chowder House, located on the mezzanine level of the hotel. We were not able to dine here due to time, but we hear it is wonderful. Ed’s Chowder House is open daily for breakfast and dinner. The restaurant is casual with a chic flair (it is The Empire Hotel after all) and serves traditional East Coast seafood fare such as lobster rolls, oysters, crab cakes and of course, chowders.

The Empire Hotel also has one of the most amazing rooftop pools in New York City. The pool is open seasonally, so make sure you book your stay in the summer to catch some sun rays.

Also on the rooftop is the Rooftop Bar. Like the lobby and Lobby Bar, it has a romantic atmosphere. The Rooftop Bar is both inside and outside, which boasts a huge space of over 8,000 square feet to enjoy your choice of beverage with your friends. Do not worry, they too serve the Chuck Bass cocktail, just ask the bartender in your best Chuck Bass impersonation. If you want, you can even host parties as extravagant as Gossip Girl on the rooftop for up to 350 guests – don’t forget to invite us! 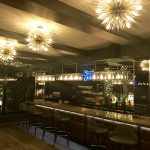 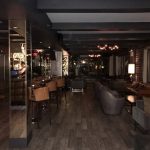 What we loved most about The Empire Hotel was its location. The hotel is located on the Upper West Side of Manhattan and we found it to truly be the perfect location. It is right across the street from the  Lincoln Center, so if you are seeing a show at the theatre, this is the BEST hotel to stay at. We literally walked across the street for our Nutcracker show and we were at the theatre. It is also only one block away from Central Park, so if you feel like enjoying the fresh air, you can easily walk to Central Park and all the way through to the other side of the city. If you do not feel like dining at Ed’s Chowder House, there are also restaurants across the street. Two restaurants are from Chef Daniel Boulud: Boulud Sud and Epicerie Boulud – great restaurants for breakfast, lunch, and dinner. 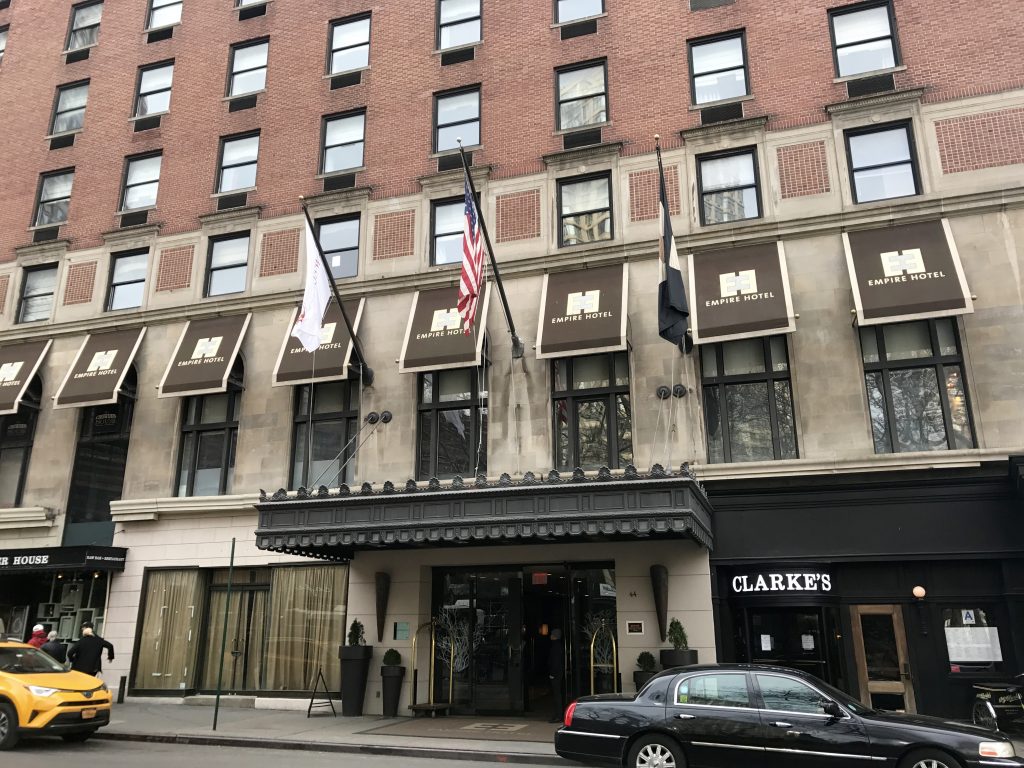 We really enjoyed our stay with The Empire Hotel. The staff were always friendly and helpful, the rooms were spacious and comfortable and we LOVED the location. Whether you are visiting New York City for the first time or the tenth time, (and of course if you are a Gossip Girl fan), then we highly recommend you stay at The Empire Hotel. It has an amazing ambiance throughout the hotel, a beautiful Lobby Bar and a rooftop to enjoy at your leisure. It really has everything we could ever want in a New York City hotel and we are sure it will have everything you need as well to make your visit to the Big Apple enjoyable!

Book Your Stay at The Empire Hotel

Gossip Girl Insider Tip – check their website for special deals, but also check third-party websites, such as Booking.com. Their website actually showed no rooms available for our dates, but Booking.com had rooms at a very great price. When we called the hotel to verify the information, they encouraged us to book with Booking.com. We recommend you double check prices and dates because you could have the opportunity to stay at this beautiful four-star New York City hotel for an amazing cost.

You know you love us, xoxo So cool! I love New York, lived there for a little bit and I'm always looking for reasons to come back. Now that I'm 21, I really want to go to a rooftop bar in the city and the one at the Empire Hotel looks amazing! This looks like such a cool hotel to stay in, especially for a girls' trip!

I think a girls trip would be perfect at the Empire Hotel especially with the nice rooftop bar.

The Empire Hotel is indeed an iconic hotel and you must have had a lovely experience there. The best part of the hotel for me based on your pictures is the rooftop pool and bar, looks like a great place for chilling out. The strategic location of the hotel is another bonus as we always give a lot of importance to location when we decide on hotels.

The location is great! in nice weather you can easily walk about 25 minutes to Rockefeller and Times Square! The rooftop is definitely a big selling point and the downstairs bar area is nice as well

Never read Gossip Girl or saw the show, but the hotel does look amazing. I always wanted to stay at the Chelsea Hotel in New York but recently found out that it closed down (I guess it's just a private residence now) but after reading your post it seems like the Empire has just as much history! Also loved the rooftop pool. I can imagine the view from up there! But with that being said it seems that $9.95 for wifi is kind of nickel and dime. I realize they gave you complementary Wifi, but it sort of bugs me when an awesome four star hotel like Empire charges for Wifi when the Motel 6 gives it to you for free.

Ya we weren't huge fans of the wifi charge either, even though we received it for free, especially since where we have been around the world it is always free. We still had a great time while on the trip. You can always go without the wifi and use public wifi at any restaurant or cafe as well. The view from up top is good but keep in mind it is not a huge skyscraper.

Haha, omg how fun! I used to love Gossip Girl back in the day! Besides the show, the hotel also looks divine! I love your party dress too!

Thank you! We need to look our best when we are out in public for the paparazzi. The hotel was great and in a perfect location.