Did you know there are at least 30,000 castles in Ireland?! That is a lot of castles! And way too many to explore during one trip. So I have gathered 12 of the best castles in Ireland that you cannot miss. Each one is spread throughout the country and has some unique history behind them. Some are iconic, have been featured in TV, almost in complete ruins or even turned into a hotel. Nevertheless, exploring these Irish castles will be some of the best highlights of your entire trip on the Emerald Isle.

Here is a list of 9 castles in 7 different counties of Ireland. A few have been restored to attract tourists with guided tours, whereas others you may explore on your own. There are also unique castles where you can kiss a wet stone or visit a famous abbey. Each castle is visually stunning, historical, and unique. Furthermore, they are all easy to locate during a road trip throughout Ireland. 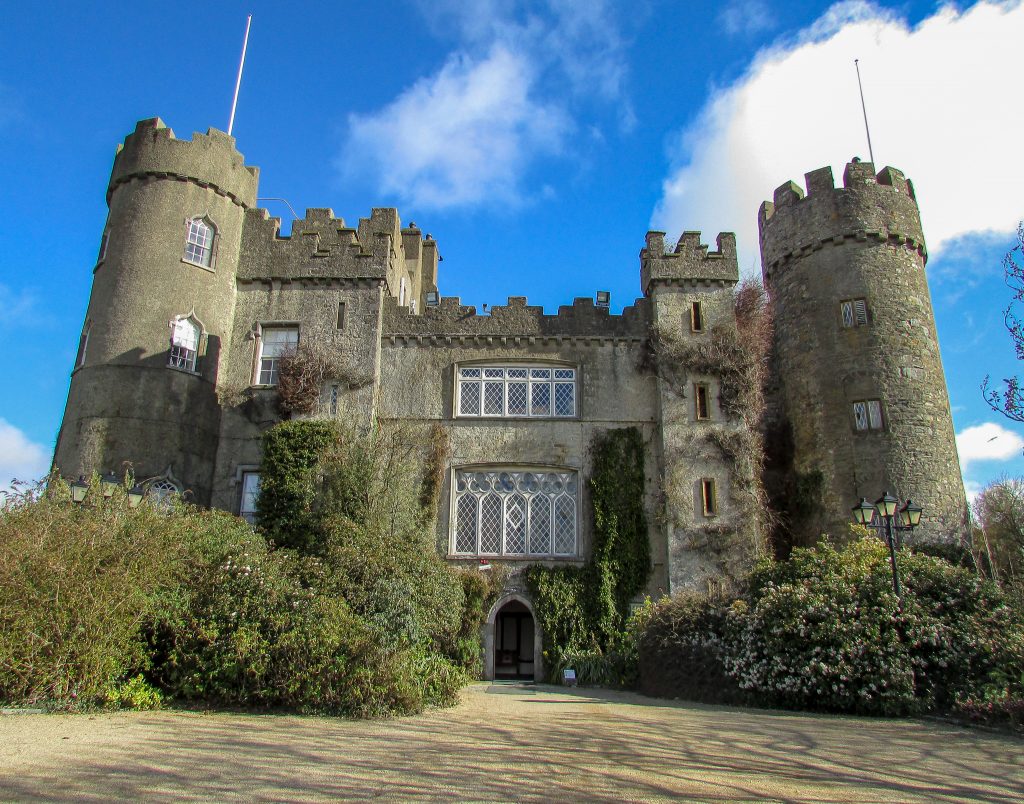 If you are flying into Dublin, Malahide Castle is the easiest and fastest castle to visit in Ireland. It is only a 15-minute drive from the airport and a great way to start any Ireland trip. Moreover, visiting Malahide Castle is definitely one of the best things to do in Dublin.

The Malahide Castle is one of the oldest castles in Ireland which dates back to at least the 12th century. It was home to the Talbot family for over 800 years. Today, it is a tourist attraction for visitors to explore the castle and its garden. The 45 minutes guided tour takes visitors through four main reception rooms and bedrooms – the Oak Room, the small and large drawing rooms, and the Great Hall. After the tour, make sure you take the time to stroll through the beautiful gardens and find clues along their new Fairy Trail. 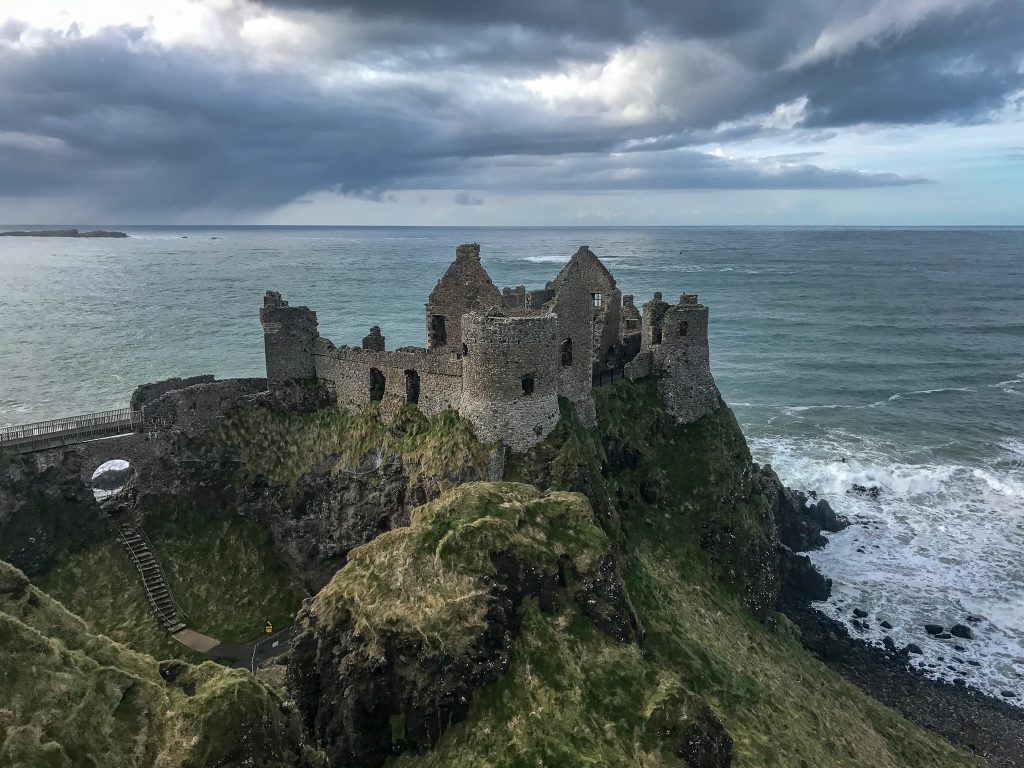 If you are a Game of Thrones fan, you do not want to miss this Castle. Dunluce Castle was used to create the Greyjoy Castle (or House of Greyjoy) on Pyke Island. When you visit Dunluce Castle, you will understand why it was chosen as the castle for Pyke Island because it sits on a dramatic edge of a basalt cliff. It is truly a stunning sight to see and a great castle to explore as it is almost in ruins.

In addition, visitors can also find archaeological digs which show Dunluce Town’s street grid system. The adventure does not end there – the castle also has an amazing sea cave beneath the castle known as the Mermaid Cave that you must take the time to see. Just follow the steps down to the right of the Dunluce Castle’s gatehouse. 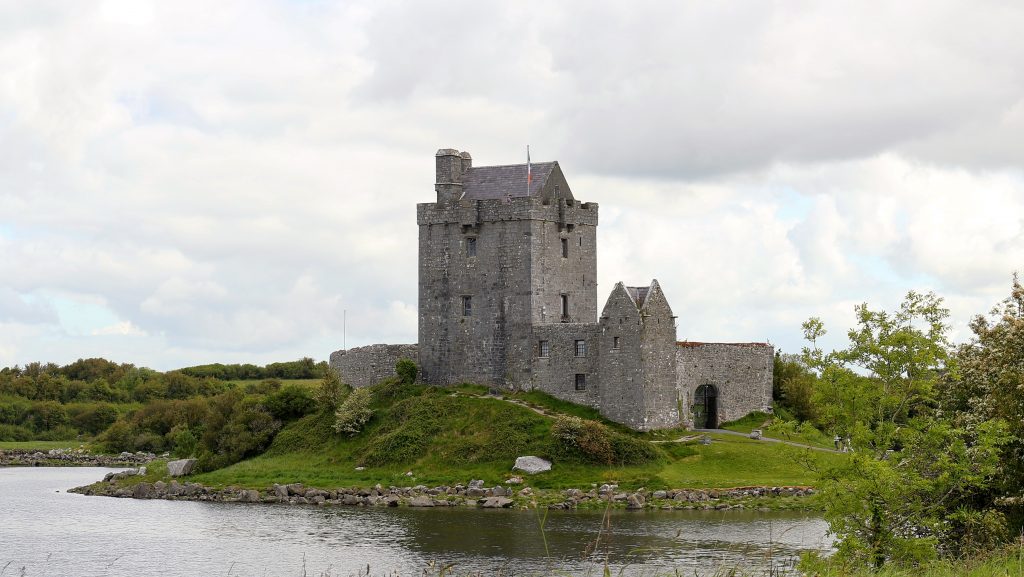 Dunguaire Castle is a visually stunning castle that sits on the shore towering over the bay. The castle has a magnificent defensive wall with a 75 ft. tower to oversee the bay. It dates back to the 16th century and is roughly restored today to allow visitors to explore within the castle walls from April through September. 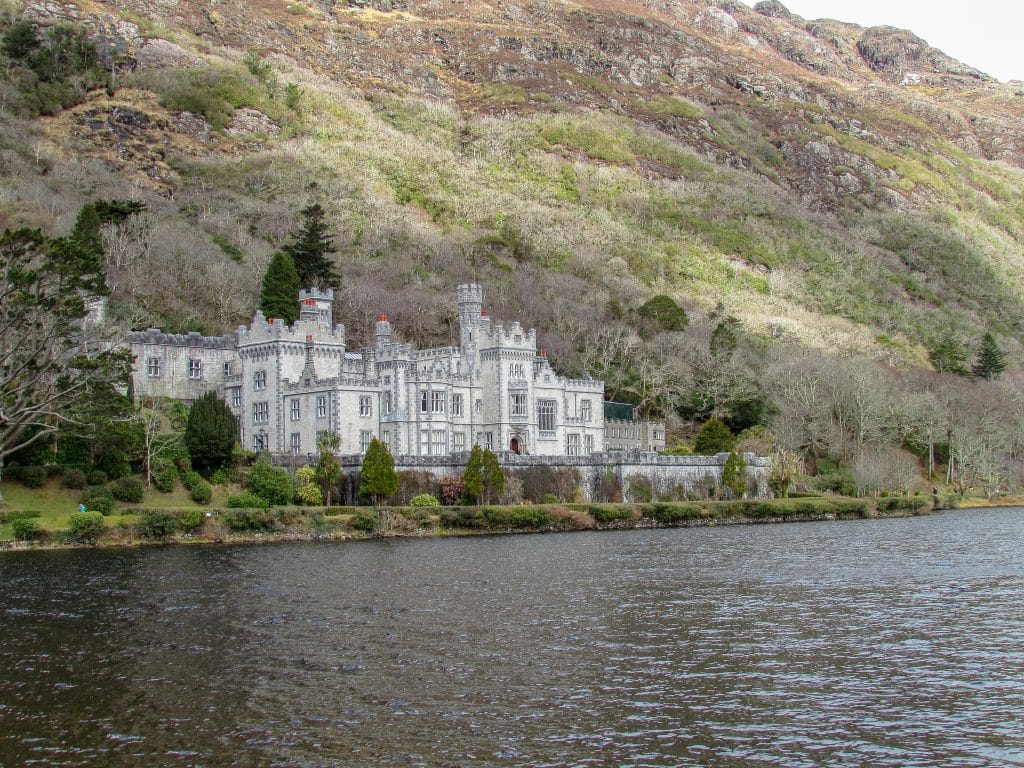 Kylemore Abbey is one of the most iconic and photographic sights in Ireland due to the beautiful landscape surrounding the castle. It is also widely known as the home for the Benedictine Nuns.

The Kylemore Castle and Estate sit on 13,000 acres and was built in 1867 for Mitchell and Margaret Henry. The castle boasts 33 bedrooms, 4 sitting rooms, and countless other rooms. Today, visitors are allowed to only see 6 rooms – the Outer Hall, Inner Hall, Drawing Room, Community Room, Dining Room, and the Rear Hall. Each room has been redesigned with the original furniture to portray the true ambiance of its history as the famous Benedictine Abbey.

In addition, visitors can also explore the Victorian Walled Gardens, Neo-Gothic Church, and Old Mausoleum. The entire estate of Kylemore Abbey can be explored on your own or with a guided tour. 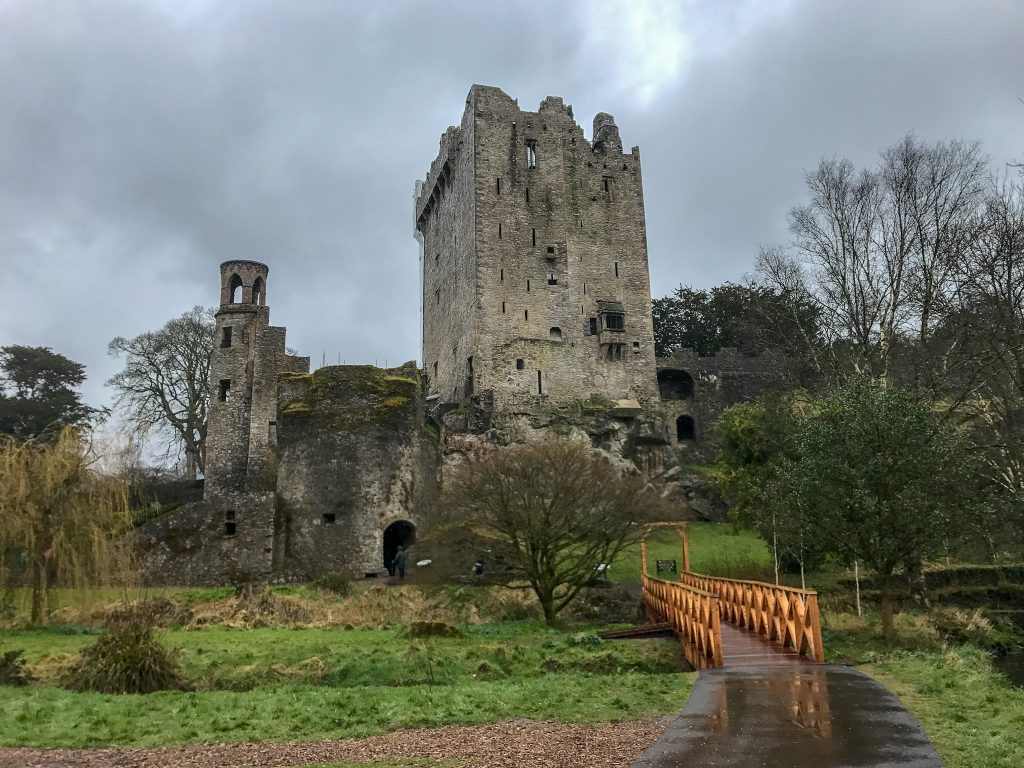 Moreover, people all over the world travel near and far to kiss the Blarney Stone to receive the “gift of eloquence”. It is a fun experience that you will laugh at and cherish for a lifetime.

In addition to kissing the Blarney Stone, the castle itself is so much fun to explore. There are so many levels within the castle with several little nooks and crannies, making it one of the best castles in Europe to visit with kids. In fact, you could play a great game of hide-n-seek. Needless to say, Blarney Castle should definitely be high on your Irish bucket list! 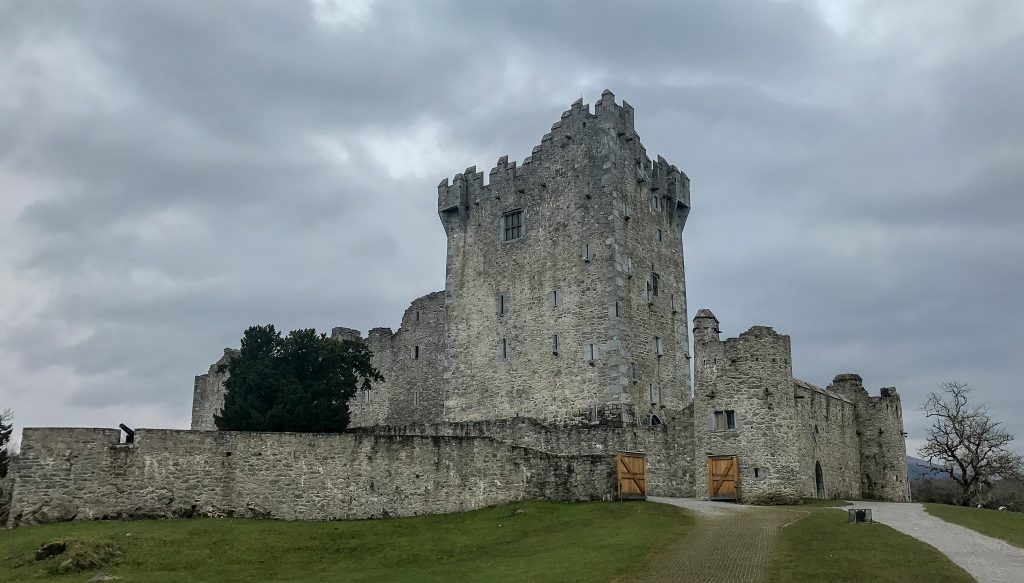 Ross Castle is a 15th-century tower house castle fortified by a defensive wall located within Killarney National Park on the edge of Lake Lough Leane. It was the ancestral home of the O’Donoghue clan and is known to be one of the strongest and more fortified castles in Ireland. Thus, Ross Castle was one of the last castles to surrender from Cromwell’s forces in the 1650s.

Today, Ross Castle has been restored and visitors can explore the grounds on their own or take a guided tour inside the castle (for a fee). Furthermore, it is one of the most picturesque castles in Ireland and can easily be visited while driving on the Ring of Kerry.

The Kilkenny Castle was built in the 13th century for William Marshal, 4th Earl of Pembroke. Then it became the residence of the Butler family for almost 600 years.

Depending on the time of the year, visitors can either enjoy a guided tour of the castle or take a self-guided tour using an informational pamphlet. Unlike other castles in Ireland, Kilkenny Castle offers visitors the opportunity to visit countless rooms including the Medieval Room, several bedrooms, library, drawing room, picture gallery wing, and more. The most stunning room to see has to be the picture gallery wing which is adorned with portraits hanging on a bright red wall. 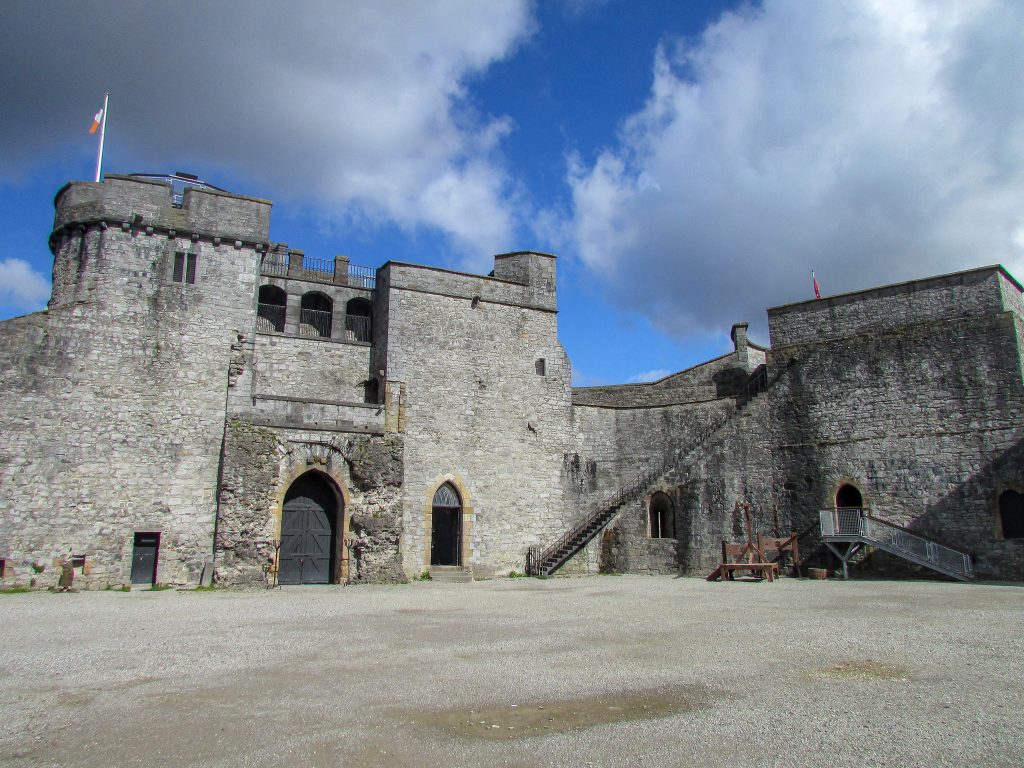 One of the more visitor-friendly castles in Ireland is King John’s Castle. It is located in the heart of Limerick and has an engaging experience for visitors to enjoy.

Before you make it to the castle’s courtyard, visitors walk through an exhibit that showcases the history of the castle which dates back to the 13th century. The exhibit features touchscreen technology, 3D models, animated projections, and an activity room for children.

Furthermore, the castle grounds are fun to explore. We found shields, helmets, and swords to wield in addition to shaming ourselves in a guillotine. You can also climb up to one of the battlements and get a great 360 panorama view of the city. Needless to say, a visit to Kong John’s Castle boasts a lot of historical information and fun for all ages. 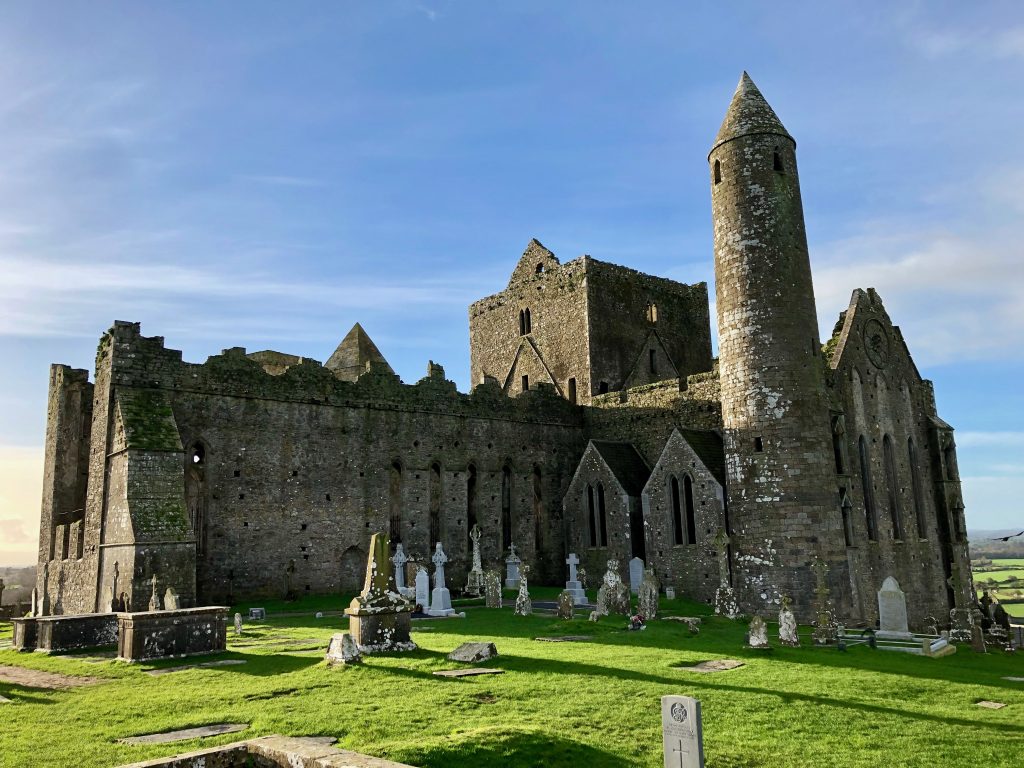 The Rock of Cashel is technically a fortress, but it is so spectacular I had to include it on my list of castles in Ireland. Trust me, it is definitely a sight you do not want to miss.

The fortress towers above the city of Cashel in a grand presence that is truly a sight to behold. The fortress is enclosed by fortified walls containing buildings that were all built in different centuries. There is a complete 11th century round tower, a 12th-century Romanesque chapel, a 13th-century Gothic cathedral, and a 15th century Hall of the Vicars Choral. Whereas around the fortress is a dramatic Gothic graveyard with beautiful Celtic high crosses.

When Adam and I visited it was very foggy and the entire atmosphere felt climactic – I hope you discover the same. Or maybe you will get lucky and come across a mythical legend, a Celtic leprechaun!

To say Adam and I love castles would be an understatement. In the seven days we were in Ireland, we stayed in 2 castles and enjoyed a luxurious afternoon tea in another one. After reading these three luxurious castle hotels, I am sure you will be tempted to book your stay with at least one of them! 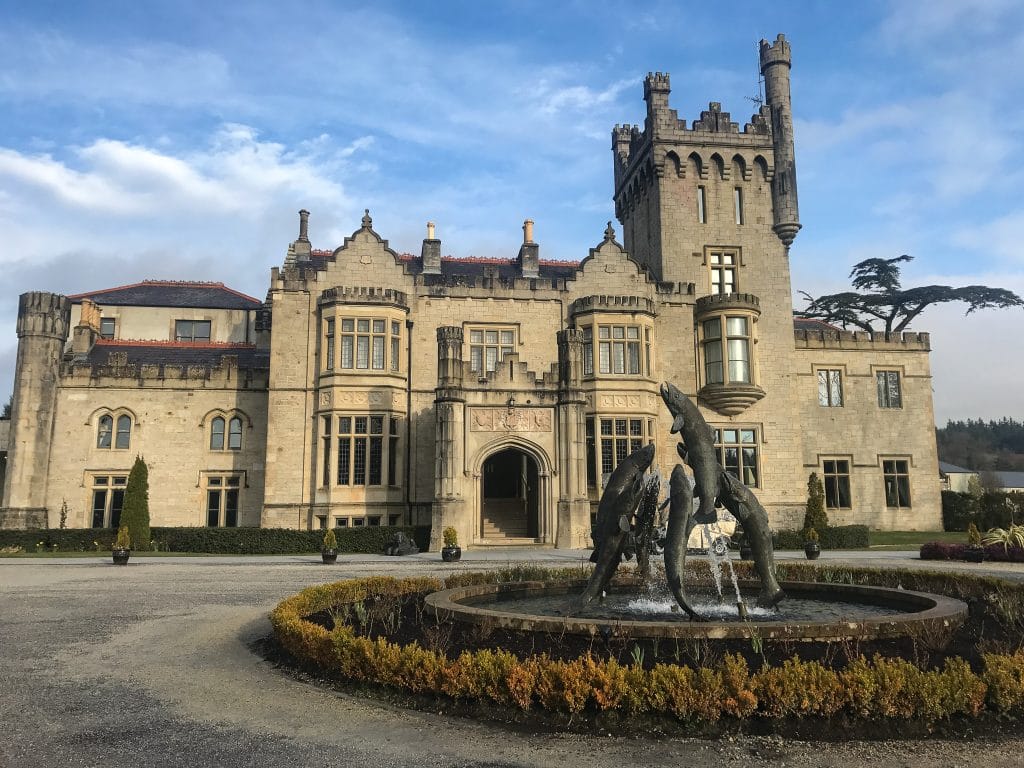 Looking for a romantic spa getaway tucked away in the woodlands of Ireland? Then Lough Eske Castle Hotel and Spa is where you want to be!

Lough Eske Castle Hotel and Spa is one of only two five-star hotels in Donegal county. So expect nothing less than perfection. The castle was originally a mansion back in 1621 and then turned into a castle in 1861.

The castle hotel has 96 different guest rooms that range from a standard courtyard room to a presidential suite. The award-winning spa, Spa Solis, has continuously been ranked as one of the best in Ireland because of its amazing Thermal Suite inside a beautiful Victorian Glass House. Lough Eske Castle Hotel and Spa has it all!

There is no greater luxury in Ireland than at Ashford Castle. It is not only one of the best castles in Ireland, but it is also one of the best hotels in the world! In 2017, it was ranked 59th in Travel and Leisure World’s Best Hotels.

Before it was a luxury five-star hotel, Ashford Castle was built during the 12th century and was home to the famous Guinness Family for 87 years. When Lord Ardilaun inherited Ashford Castle, he created the tradition of afternoon tea which not only became a legacy but a daily event that remains today. If you do not have the opportunity to spend a night at Ashford Castle, I highly encourage you to at least enjoy their luxurious afternoon tea experience. It includes unlimited teas from around the world, scrumptious sandwiches, and decadent desserts. 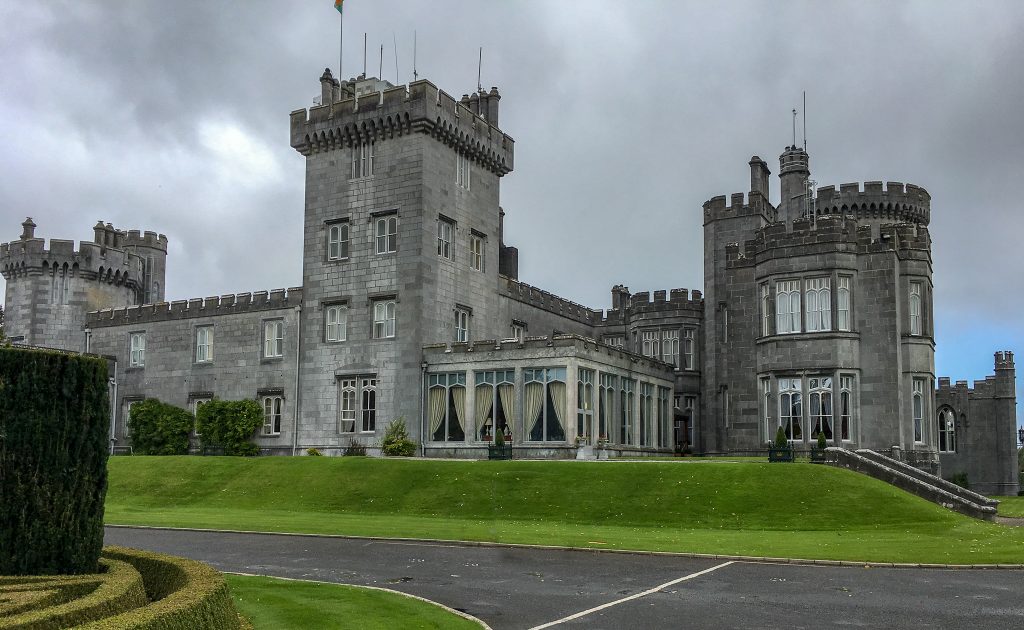 Dromoland Castle is another fantastic and luxurious castle hotel to stay in during a trip to Ireland. The original structure of Dromoland Castle was built during the 15th century, but the castle standing today was built in 1835.

There is so much to enjoy inside and out of the castle. Inside the castle, guests can enjoy a flawless dining experience with a five or eight-course tasting at the Earl of Thomond. Outside of the castle walls, guests can enjoy an array of activities including playing golf on a world-class course, archery, fishing, horse riding, pony and trap ride, falconry, clay shooting, tennis, and more. Adam and I tried our hand at falconry and clay shooting and had the time of our lives. Needless to say, I highly recommend both activities and spending at least one night at Dromoland Castle.

Of course, there are more amazing castles in Ireland that are worth visiting, but this list should be a great start to see some of the best the country has to offer. Please let me know in the comments if I missed any castles worth mentioning! 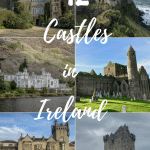 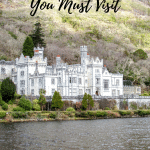 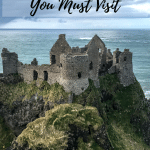 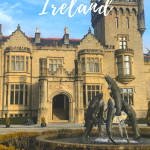 […] Blarney Stone if you’re so inclined — at the end of this post. It’s definitely one of the castles in Ireland that you can’t […]

The Ultimate Itinerary for 7 Days in Ireland - Our Sweet Adventures

[…] you plan to visit Ireland between late June through August, be prepared for long waiting times to kiss the Blarney Stone or crowds of people along the Cliffs of […]

Great article. Currently, I am in Ireland and I will definitely go to check out these castles. I have bookmarked it for future references. Thanks for sharing.